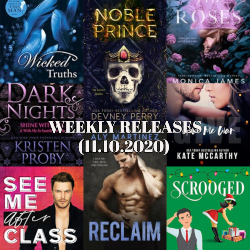 The night Luke Rosen met Scarlett Marks was the only time he’s regretted becoming chief of police. One horrific night of blood and death, and now she’s living under his roof—all because he swore an oath to serve and protect.

Scarlett is stubborn and infuriating. She has no respect for the order in his structured life, and she never does anything she’s told. Worse, she doesn’t seem to care that the information she has on a motorcycle gang means she might end up dead. But her unwavering strength, her courage and tenacity and beauty, makes it impossible for him to abandon her.

If Luke is going to keep her safe, he’ll have to make the hardest decision of his life. He can either honor his values as a cop, knowing Scarlett is unlikely to survive . . . or he can break all the rules and protect the woman who’s invaded his home and his heart.

Shine with Me by Kristen Proby

Sabrina Harrison hates being famous. She walked away from show business, from the flashing bulbs and prying eyes years ago, and is happy in her rural Oregon home, dedicating her life to her non-profit.

Until Hollywood calls, offering her the role of a lifetime. In more than ten years, she’s never felt the pull to return to the business that shunned her, but this role is everything Sabrina’s ever longed for.

Now she has to get in shape for it.

Benjamin Demarco’s gym, Sound Fitness, continues making a name for itself in Seattle. And now, he finds himself with the task of training Sabrina, getting her in shape for the role of her life. He’s trained hundreds of women. This is his job. So why does he suddenly see Sabrina as more than just another client? His hands linger on her skin, his breath catches when she’s near.

He knows better. Soon, she’ll be gone, living her life. A life that doesn’t include him.

To the outside world, my life is perfect.

I’m young and rich, and some may even say I’m beautiful. But I would give anything to be somebody else because after being extraordinary all my life, all I wish for is…silence.

Eleanor Cole had no idea that when she met the charmingly irresistible Becker Hunt, she was putting her life on the line. So when she discovers his secrets, escape seems to be her only option – but Becker isn’t ready to let Eleanor go.

She knows better than to fall into his corrupt world again, but how long can she resist when he’s stolen her heart?

Eleanor must make a choice, to stay and follow Becker into the heart of the danger…or risk losing him forever!

Choices. Everyone makes them. From mundane to unimaginable, one choice can change the trajectory of your entire life.

It was one summer beneath the trees, but with Camden, I had a place where I belonged.
A friend who was always waiting for me.
A boy who I caught staring at me more often than not.

He was mine, but when the world closed in and secrets exploded all around us, it was my choice to let him go.

Choices. Everyone makes them.
But mine would ruin us all.

I’d like to preface this by saying it was never my intention to ever get involved in a workplace romance, let alone get involved with the most surly, agitating, and pompous man I’ve ever met who just so happens to be my new friend’s brother.

My intentions were to show students how English and reading books could actually be fun and make a new life for myself in the suburbs of Chicago.

But so far, I’ve managed to be called into the principal’s office.

Coerced into participating in the teacher’s badminton league.

And instigated into passionate fights with Arlo Turner over education and decorum while losing my underwear at the same time.

Known as Mr. Turns Me On, he’s the reason I might get fired from my first ever teaching job

Fiery, wilful, desperately in love. The famous singer and the man who protects her. Evie and Jared Valentine have it all. Or so it seems. No life is ever perfect. The tether between them, which was once incredibly tight, is now loose and growing looser by the day.

Just when it seems they’ll find their way back to each other, someone from Evie’s past rears his ugly head, riding in on his Harley to steal her away.

Will Jared find her in time to save their marriage, or is it all too little too late?

The last thing I needed was to share an Uber with Scrooge—a cocky lawyer on a snowy Christmas Eve. It was bad enough I was on my way to court for the gift of eviction.Although maybe today wouldn’t turn out so bad after all.The Sexy Scrooge and I started to connect as we trudged our way through a storm. Our ride was about to end. But would I ever see him again?

Note to self: Ask Santa for glasses this year. When I accidentally mistook a gorgeous man resting outside my building for a homeless person in need of lunch, we got into it. I’d only been trying to do a good deed around the holidays, but he called me righteous. I called him something far worse. If only I didn’t have to see him again. But fate had other plans.

It was just supposed to be a simple kiss with a stranger. I’d done it to prove a point—that I hadn’t lost my sense of adventure. But you know what they say about the best laid plans. Maybe I’d get something in my stocking after all this holiday season…