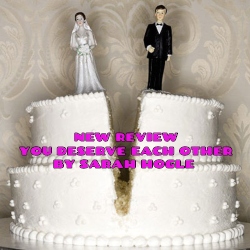 You Deserve Each Other is the debut book by Sarah Hogle and it is fun, sarcastic and witty.

Naomi and Nicholas are engaged and ready to get married but they have forgotten why they fell in love. They have lost touch and the interest to each other. Whoever cancels the marriage, pays the pill, so a war of games/pranks are on.

This book was a little hard to read in the beginning. Naomi appears as immature and selfish and Nicholas as weak and a momma’s boy. There was so much miscommunication and passive aggresive behavior that I did not want for them to be together. They irked me a little until the second half of the book were their true characters were shown.

Naomi is a strong and fierce character that slowly reveals her insecurities. Nicholas was a mystery to me at the start but then the man stole the show. Naomi was trying to provoke him with her pranks while Nicholas was trying to show her that he truly cared. He did some little things that made him love him. I would have liked to see his POV.

Although, the first part of the book was a little over the top and hard to read because they appeared as bitter, the second part is honest and sweet. It was nice seeing them falling in love again and supporting each other.

This book is not perfect but it is definitely worthy of attention. It talks about real problems with a funny and entertaining way!