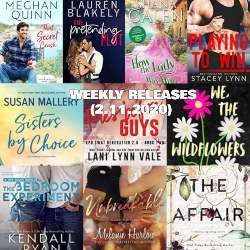 In hindsight, I should not have had that fifth mimosa at Breakfast with Santa.

Or the sixth, seventh, and eighth.

But my shame over the public meltdown that resulted was nothing compared to being abandoned by my husband of fifteen years for a much younger woman—and did I mention she’s pregnant?

For the sake of my children and my pride, I packed up and headed for my childhood home and the small town where I grew up. Cloverleigh Farms would be the perfect place for a fresh start.

Falling for Henry DeSantis wasn’t part of the plan.

Sure, he’s easy on the eyes and hard in the bedroom (also the hallway, the bathtub, and on top of his desk), but he’s newly divorced too, and things between us are moving so fast I’m afraid neither one of us has had enough time to heal. Not to mention the fact that I’m a single mom now—my kids have to come first.

But Henry makes me feel beautiful and sexy and wanted and strong—I haven’t felt that way in years. We understand each other, and when I’m in his arms, I’m tempted to trust again. To love again. To let myself be loved without fear.
But deep down, I’m terrified.

Is this all too much, too soon? Or am I a fool to let a second chance at happily ever after pass me by?

Playing to Win by Stacey Lynn

It was a three-week fling. Nothing more than a couple of college kids having some fun, but then I did the stupid thing and fell for Jude Taylor quicker than he can score a goal on the ice. And after one beautiful night together, he left for the pros before I could make my first cup of coffee.

I thought I’d put him behind me. I thought I’d moved on. Then he hobbles into my physical therapy office and I realize how absolutely wrong I’ve been—there’s no getting over Jude Taylor.

But now things are complicated. Jude lives half a country away and his career is in direct opposition to my need for stability. Most of all, getting involved with him could mean losing my job and everything I’ve worked so hard for.

Jude doesn’t seem to mind one bit and he’s all in. He might be a patient in my office, but he’s no longer the patient guy I remember.

This time, he’s playing to win, and the prize he’s looking to score is me.

The Bedroom Experiment by Kendall Ryan

When your stepbrother is a hot hockey stud with more notches in his bedpost than, well anyone, he’s the perfect candidate to help you gain a little bedroom experience. At least that’s my plan this V-day…

Note: This is a hot and steamy standalone novelette. Contents include: One sweet but rough-around-the-edges hockey player who’s going a little crazy. One blunt, knows-what-she-wants heroine who picks through his self-defense. No cheating. Low angst. And a sweet, melty HEA.

We, the Wildflowers by L.B. Simmons

“Their strength and ferocity stem from below the surface where their roots are forever tangled, interwoven in such a way that for the remainder of time they bloom together”

No one loves them, no one cares about them, no one even sees them until they end up in Mary Rodriguez’s home, an outpost for Sacred Heart’s troubled youth program. It is within these walls that the four teens forge unlikely friendships. They experience the intensity of first loves, share secrets, and suffer losses, vowing to make the world a better place in spite of their personal battles with addiction, depression, loneliness, and abuse. But when the unthinkable happens, those friendships are tested in ways they never could have imagined.

Will they find strength enough to survive or will their bonds be too fractured to heal them yet again?

Sisters by Choice by Susan Mallery

After her cat toy empire goes up in flames, Sophie Lane returns to Blackberry Island, determined to rebuild. Until small-town life reveals a big problem: she can’t grow unless she learns to let go. If Sophie relaxes her grip even a little, she might lose everything. Or she might finally be free to reach for the happiness and love that have eluded her for so long.

Kristine has become defined by her relationship to others. She’s a wife, a mom. As much as she adores her husband and sons, she wants something for herself—a sweet little bakery just off the waterfront. She knew changing the rules wouldn’t be easy, but she never imagined she might have to choose between her marriage and her dreams.

Like the mainland on the horizon, Heather’s goals seem beyond her grasp. Every time she manages to save for college, her mother has another crisis. Can she break free, or will she be trapped in this tiny life forever?

How the Lady was won by Shana Galen

When a master of disguise marries a woman who sees right through him…
Lady Daphne, daughter of the Duke of Warcliffe, is one of the Three Suns. Society revolves around her. But there’s one person who doesn’t seem to know she’s alive—her own husband. Lady Daphne was thrilled to marry Colin FitzRoy, the son of her mother’s dear friend, seven years before. But then he left for the army and their marriage never really had a chance. Now she’s in trouble, and Colin has reentered her life. She’s determined to refuse his help, especially after the way he’s treated her, but Colin can be persuasive…especially when he has her alone.

Baring it all is part of the seduction.
Colin FitzRoy was known as The Pretender during the war. He’s an expert in the art of disguise, but even when he takes off the mask, he hides who he really is. Colin pretends he doesn’t have feelings, but when he’s thrust together with his estranged wife, his buried emotions resurface. Before long Colin is juggling an elderly pug, a wife-hunting Scotsman, and a duplicitous street urchin in an effort to keep Daphne safe. But his greatest challenge is not only to seduce her but to win her heart.

That Secret Crush by Meghan Quinn

What happens when your secret crush isn’t so secret anymore?

I’ve had feelings for Eve Roberts for as long as I can remember, but because she also happens to be the twin sister of my best friend, Eric, I’ve never acted on my feelings and long ago resigned myself to keeping my crush under wraps.

But after a terrible falling-out with Eric involving a failed restaurant venture and plenty of blame on both sides, I’m back in Port Snow without my best friend and without any direction. But can you guess who’s here? Eve. And my attraction to her is as strong as ever.

As old feelings rush back, Eve and I find ourselves pulled together, whether we like it or not. Lines are crossed, secrets are kept, and we soon discover that the difference between love and friendship may not be so black and white, after all.

Everyone wants that secret crush to love them back…but will I be ready when she does?

Sometimes people come into a person’s life and make their heart skip a beat.

Those people are called cops.

Well, one cop in particular.

A SWAT officer for the Kilgore Police Department, to be specific.

The first time Avery Flynn saw Derek Roberts, she was photographing him for the first annual Kilgore Police Department SWAT calendar. He was leaned back in his squad car, shirtless, and giving her a smile that was completely between them. A smile that hinted at what he wanted to do to her later.

When she scrounges up the courage to ask him out after the photoshoot, he laughs in her face.

Well, screw you, too, Mr. February.

She was a mousy girl who dressed like a twelve-year-old girl. Her tight leggings, extra baggy Star Trek t-shirt denoting her a Klingon captain, and her surprisingly clean Chucks didn’t leave much of an impression.

Now, the outfit that she was in weeks after he rebuffed her? Yeah, now that caught his attention.

Too bad that happens when he’s trying to save her from what’s sure to be death thanks to an unhinged native Texan who’s convinced she was the reason he lost his last chance at a million dollars.

When he tries to save her, she tells him she’d rather take a cattle prod to the forehead than go anywhere with him.

There are some paths in your life you’re never meant to take.
Yet, by some twist of fate, you find yourself on the forbidden road all the same.

Those are the words I stumble upon when I unearth a hidden journal that once belonged to my grandmother.

A hidden journal that details a heartbreaking affair with her husband’s brother. It’s a family secret I’m unprepared to deal with, especially when my own life begins to parallel hers.

Sawyer Gallagher was never on my radar. The moment I met his younger brother, I was taken. Done for. Love-drunk.

But, some things aren’t meant to last and at the age of thirty-three, I find myself divorced, penniless and living with my parents. When Sawyer stops by our family’s antique store, asking for a job, I figure: Why the heck not? Life can’t get much worse.

It doesn’t take long to realize just how different the Gallagher brothers are. Sawyer is kind, supportive, and, oh, did I mention sexy as hell?

In a small town like ours, I can’t help but ask myself…
Can I fall for my former brother-in-law?
Or is this just history repeating itself?

I don’t mean to just blurt it out. “Why, yes I’m engaged!”
But once I say it to a potential client, there’s only one logical thing to do — cast the role of my fake fiancé.
Easy enough. As a casting director, my job is to find the most talented players for every part, so I choose dreamy, edgy, sexy, sarcastic Reeve.And I sign him up for one week in the role of mine.
It’s not as if I’ll fall for him in five nights even if we get a little cozy one night at theater. It’s not as if I’ll want more even after a scorching afternoon in the stacks of the New York Public Library.
I can’t let myself fall because on Friday at midnight the curtain drops on our fake romance . . .
The Pretending Plot is a reimagining of the 2013 story Pretending He’s Mine (no longer available for sale). The Pre