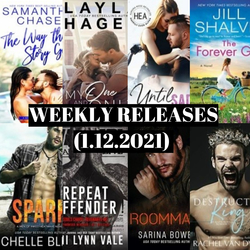 Wanted: One roommate to share a 3-bedroom house, split the rent, and ideally not be the guy I can’t stop thinking about.
I’m a man with too many secrets, so the last thing I need is a new roommate with a sexy smile and blue eyes that see right through me. Eight years ago, Roderick left town after high school. We’re not friends. I owe him nothing. But back then, I let one of my secrets slip, and he’s the only one who noticed.
Part of me knows I should run far, far away. But the other part wants him to come upstairs and spend the night. But if I let him in, I could lose everything.

Seeking: a room to rent in town. I’m tidy, have no pets, and I will feed you homemade bread.
I should probably add: Gay AF, and has no filter. It’s no wonder my new landlord is so wary of me.
A smarter man would ignore those hot glances from Kieran Shipley. The broody lumberjack wants more from me than another homemade pretzel, but if I push my luck, I’ll end up back on the street.
Too bad I’ve never been smart with my heart…

“I’m sorry for your loss.” I would rather be tortured for an eternity than hear those damn words from one more person, as if Claire, my dead fiancé, was a cell phone or car keys.
How about, I’m sorry your life is over.
I’m sorry you want to die too.
I’m sorry you see her in your dreams and wake up only to relive the nightmare.
I’m supposed to be the strongest of them all. Ash Abandonato, ruler, assassin, made man, brother, friend—instead, I hurt everyone I touch in hopes that they’ll feel even a sliver of the pain that bears down on my shoulders.
I didn’t lose.
It was taken from me.
And it’s all her fault, Annie Smith.
I daydream about her death.
And then I close my eyes, and I see her soft smile. I feel her touch, her kiss—it was a mistake what we did that night, but I can’t take it back, and now she’s under my father’s protection—my protection.
My worst enemy.
The woman I’m the most attracted to.
I can’t decide if I want to strangle her or kiss her, and now that she’s stuck in my life, my only goal is to make her feel the same loss I do and destroy her in the process.
I’ll trick her with my touch.
Seduce her with my kiss.
And in the end, when my enemy is at her most vulnerable—I’ll bring down an entire Empire and continue my reign as King.
Bow down, I’ll say as I bring the Five Families to their knees.
Blood in.
Never out.
Damned.

Nick Gallo lives wild and free, avoiding any complications or drama. But when he overhears a conversation at a late-night taco stand, he can’t help but insert his two cents, telling the woman she was too good for that kind of hassle.

Josephine Carmichael lives in the crosshairs of the paparazzi as the child of a Hollywood power-couple. But when her celebrity boyfriend has an affair while they’re on vacation, she takes off to the middle-of-nowhere Florida, ending up crying in her nachos.

And when Nick finds Josephine sleeping in the parking lot of a local store, his protective instincts take over. What starts out as a simple favor, takes them down a road they never imagined.

My One and Only by Layla Hagen

Tess Winchester loves her life. Her family is growing with new nieces and nephews for her to spoil. And her lingerie business is really taking off, so in order to keep up with demand she needs more capital. Though Tess had always dreamed about finding Mr. Right, and having a family of her own, dating hasn’t been easy so working extra hours is never a problem.
When an opportunity of a lifetime arises, Tess jumps at the chance to present to the CEO of Harrington & Co, New York’s hottest investment firm.
She’s determined to make the right impression, but when Liam accidently walks in the ladies room during a wardrobe malfunction, things get off to an… interesting start.

Tess isn’t Liam’s type, they’re too different:
She’s a romantic. He’s a realist.
She’s a dreamer. He’s a practical man and doesn’t believe in love.
Besides, if they’re going to sign a deal, it’s best not to mix business with pleasure.

Despite their differences, Liam finds himself doing anything in his power to win her over. She’s captivating, and he won’t back down until they explore the connection that keeps him on his toes. He can’t get enough of her sassy mouth, her tenacity, and the tenderness that encounters him at every turn. Her blushes drive him crazy. Liam wants Tess.
And Liam always gets what Liam wants.

The Forever Girl by Jill Shalvis

When Maze returns to Wildstone for the wedding of her estranged bff and the sister of her heart, it’s also a reunion of a once ragtag team of teenagers who had only each other until a tragedy tore them apart and scattered them wide.

Now as adults together again in the lake house, there are secrets and resentments mixed up in all the amazing childhood memories. Unexpectedly, they instantly fall back into their roles: Maze their reckless leader, Cat the den mother, Heather the beloved baby sister, and Walker, a man of mystery.

Life has changed all four of them in immeasurable ways. Maze and Cat must decide if they can rebuild their friendship, and Maze discovers her long-held attraction to Walker hasn’t faded with the years but has only grown stronger.

Lynnwood Thatcher Windsor has lived a lot of lies. Seen a lot of good men go down.

But he will not stand by and watch as the world he’s built from the ground up burns to ashes before his eyes. Even if he has to build an army to combat the problem he sees brewing around him.

One step at a time, he carefully lays out his plan, building layer after careful layer until everything is where he wants it to be.

Every part is impeccably played, his pawns are in the perfect place, and then she barrels into his life, totally scattering every single piece he’s set in motion.

The bad thing is, she doesn’t even realize how badly she’s messed up until she’s roused the beast.

***
The day that Six Ines Broussard met Lynnwood Thatcher Windsor was the worst day of her life.

First, she has a public breakup with a man she’s not even dating. Second, she has to deal with a black-tie event that she’d rather gouge her eyes out than to go to. Third, she then has to sit at a table for hours on end with the one man she despises.

Just wanting a break, she thinks she’ll lose herself for a few hours and do what she loves to do best—spend time by herself and go for a walk in the middle of nowhere, spot some birds, and get a little sun. Only, her day doesn’t go nearly as planned.

She walks right into the middle of hell. And at the center of it? Lynnwood Thatcher. The mayor. The man that she took one glance at on the night of his inauguration and dismissed as boring. A total stick in the mud.

Only, he’s not so boring shirtless, in the middle of nowhere, doing things that are very illegal.

At first, she’s appalled. Then her interest gets piqued. Stuck-up suit is hot! And he has tattoos. Oh, and let’s not forget one hell of a mouth on him!

Then he goes and kidnaps her, and she realizes that nobody is quite as hot as you thought they were when they’re now holding you hostage.

Misadventures with a Lawyer by Julie Morgan

Legendary lawyer Chase Newstrom is as famous in court as he is with the ladies. His work-hard, play-harder mindset is why he’s never lost a case…or lacked a model on his arm. But a recent twist before the bench threatens to derail his perfect record.

Chase turns to junior associate Ainsley Speire to solve his case’s problems after hours so he can gallivant around town with yet another lady friend, and Ainsley, despite being driven and focused, is none too pleased with her boss’s demands. She’s had to cancel long-standing plans at the last minute, again…and vows it’s for the last time.

Ainsley sits down with Chase’s most expensive scotch in one hand and fancy pen in the other and pours it all out, literally and figuratively. When Chase finds the note—and a passed-out Ainsley—he’s intrigued. Perhaps there’s more to the soft-spoken Ms. Speire than he thought.

Ainsley wakes to Chase’s trademark cocky grin, and Chase sees a new spark in Ainsley’s eyes. Anything between them would be an HR nightmare, but is there a chance Chase and Ainsley are willing to work together on one more case? A case that promises a lifetime sentence of love?

Misadventures is a romantic series of spicy standalone novels, each written or co-written by some of the best names in romance. The stories are scandalous, refreshing, and, of course, incredibly sexy. They’re the perfect bedside read, a ‘quick blush’ for the reader who loves a page-turning romance.

The Way the Story Goes by Samantha Chase

Thriller writer Mia Kingsley has been hit with a serious case of writer’s block and she needs a little peace and quiet. A beach front property in Magnolia Sound seemed like the perfect escape and just the change of scenery she needs to get the words flowing again. That is, until her noisy neighbor starts running power tools and blasting music at all hours of the day and night. Before long, the next victim in her story starts to bear an uncanny resemblance to the contractor next door.

Austin Coleman never wanted to come back to Magnolia Sound. But sometimes, life takes an unexpected turn and the only way to get back on your feet is to go home. His plan is to avoid all things connected to his past, and renovating a beach house in the off-season is just the way to do that—there’ll be no neighbors and no distractions. Or so he thought until he almost maims his sexy neighbor with a flying sink. Despite his best efforts, trouble follows everywhere he goes.

At first she wanted to kill him. Now she wants to kiss him. Sometimes you have to wait and see where the story goes.

Cruising Pacific Coast Highway, Dean Keller had one thing on his mind—the job he needed to nail down.

One look at the fiery pixie with emerald eyes and Dean knew he had to make her his.

The timing couldn’t be worse. Things were… complicated.

Dean should’ve walked away from her.

But he should have.

Because too soon the truth would be revealed.

And Dean would be left desperate to prove to Sadie his love for her was real.

Even if not everything else was.

Until Sadie is part of the Aurora Rose Reynolds’ Happily Ever Alpha World. If you loved Until Cobi, then you will want to read Until Sadie.