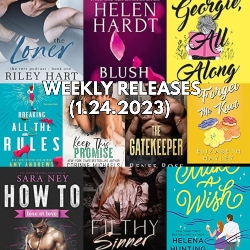 Keep This Promise by Corinne Michaels

I am about to lose everything.

My home. My name. My future.

My husband was involved in something that could cost us our lives, and on his deathbed, he demands my daughter and I flee Britain. I had no idea he found her biological father, Holden James, in Rose Canyon, and that’s where we’d start over.

The moment we see each other, feelings I’d long forgotten rush over me. Holden doesn’t hesitate to care for us. We find ourselves reaching for each other, even when we should hold back. His smile warms me, his arms protect me, and against my better judgment, I fall for him. All the possibilities of a future are threatened by a looming past.

I’m being hunted, and it’s just a matter of time before someone finds me guilty of crimes I didn’t commit. Whatever trouble my husband was involved in won’t evade me forever.

I am trying to keep my promise and stay for Holden, but I don’t know how long it’ll be before we have to run.

My name was Sophie Pearson, but I vanished, just like my hope to ever find love again.

Make a Wish by Helena Hunting

Ever have a defining life moment you wish you could do over? Harley Spark has one. The time she almost kissed the widowed father of the toddler she nannied for. It was so bad they moved across the state and she never saw them again.

Fast forward seven years and she’s totally over it. At least she thinks she is. Until Gavin Rhodes and his adorable now nine-year-old daughter, Peyton, reappear at a princess-themed birthday party hosted by Spark House, Harley’s family’s event hotel. Despite trying to avoid the awkwardness of the situation, she can’t help but notice how unbearably sexy he looks in a tutu. Add to that a spontaneous hives breakout, and it’s clear she’s not even remotely over the mortification of her egregious error all those years ago.

Except Gavin seems oblivious to her inner turmoil. So much so that he suggests they get together for lunch. For Peyton’s sake, of course. It’s the perfect opportunity to heal old wounds. Or it could just reopen them. This is one of those times Harley wishes she could see the future…

How to Lose a Love by Sara Ney

With too much on my plate, the very last thing on my mind was a relationship—the football draft was looming and dating got in the way. I never understood why my teammates bothered with girlfriends. None of us had the time.

When my sports agent suggested that being seen in public with a respectable girl would be good for my bad reputation, I couldn’t think of a single person to help me out. The only girls I knew weren’t wifey material, and the ones who were? Might catch feelings.

Responsible. Sarcastic. Smart. Ryann is perfect but there was one clincher: she was my teammates ex-girlfriend and I had recently been paid by him to dump her.

Not the best start to a fake relationship…

The Loner by Riley Hart

As a founding member of The Vers, a queer podcast I host with my three best friends, I’m The Loner—quieter than the others, and except for them, I don’t let myself get too close to people. Most of them just let you down anyway, or maybe it’s just that something about me chases people away.

Infrequent, no-strings-attached hookups have always worked for me. Who knew my favorite one would become such a popular movie star? But Sebastian Cole and I made it work, meeting up whenever he was in Santa Monica and in the mood—until he called it off when he got a serious boyfriend. A boyfriend he later found in bed with another man.

Now Sebastian is back in California, taking a break from acting. He needs a friend, and for whatever reason, he decides that should be me. We’ve known each other intimately for years, and yet we’ve never spent much time together with our clothes on. When he starts taking me places, it feels suspiciously like dates…and surprisingly, I like it.

Despite our differences, Sebastian’s lonely, like me. The more we hang out, the more I realize I’ll never get enough of him.

A loner dating a celebrity doesn’t make much sense. I don’t know how to be someone’s boyfriend, let alone be in the public eye. But to call him mine, I’ll need to leave the past behind and finally allow myself to move forward with him.

The Loner is an opposites attract romance about a movie star rethinking his career and a bar owner/podcast host who isn’t fond of most people. Expect Southern California sun, swoon, found family and once-in-a-lifetime friendships.

Georgie, All Along by Kate Clayborn

Longtime personal assistant Georgie Mulcahy has made a career out of putting others before herself. When an unexpected upheaval sends her away from her hectic job in L.A. and back to her hometown, Georgie must confront an uncomfortable truth: her own wants and needs have always been a disconcertingly blank page.

But then Georgie comes across a forgotten artifact—a “friendfic” diary she wrote as a teenager, filled with possibilities she once imagined. To an overwhelmed Georgie, the diary’s simple, small-scale ideas are a lifeline—a guidebook for getting started on a new path.

Georgie’s plans hit a snag when she comes face to face with an unexpected roommate—Levi Fanning, onetime town troublemaker and current town hermit. But this quiet, grouchy man is more than just his reputation, and he offers to help Georgie with her quest. As the two make their way through her wishlist, Georgie begins to realize that what she truly wants might not be in the pages of her diary after all, but right by her side—if only they can both find a way to let go of the pasts that hold them back.

Honest and deeply emotional, Georgie, All Along is a smart, tender must-read for everyone who’s ever wondered about the life that got away . . .

The Gatekeeper by Renee Rose

She’s my captive.
My prisoner.
I will make her talk.

The bratva put a gun in my hand at age thirteen. Gave me freedom, a sense of belonging, and the family I never had.

There’s no way I’m going to let this slip of a woman harm my boss.
No matter how beautiful she is.
How beguiling.
How painfully fragile.

Hurting a woman, however, is not possible.
So I’ll find other ways to torture her. Other, far more pleasing ways.
And in the end, my little prisoner will reveal all her secrets.
In the end: she will be mine.

Breaking All the Rules by Amy Andrews

Beatrice Archer has always done everything she’s supposed to —worked her ass off, ignored her non-existent personal life, and kept her mouth shut. Now she’s over it. The rat race, respectability…the underwire bras. She’s taking her life back. Starting with moving to Nowhere, Colorado to live life on her own terms.

Now Bea gives exactly zero forks. Beer for breakfast. Sugar for everything else. Baggy sweats and soft cotton undies FTW. Then a much younger and delightfully attractive cop is called to deal with her flagrant disregard for appropriate clothing outside the local diner (some folks just don’t appreciate bunny slippers) and Bea realizes there’s something missing from her little decathlon of decadence…and he might be the guy to help her out.

When it comes to breaking rules, Officer Austin Cooper is surprisingly eager to assist. He’s charming, a little bit cowboy, and a whole lot sexy. But Bea’s about to discover that breaking the rules has consequences. And all of the cherry pies in Colorado can’t save her from what’s coming…

When my father tries to force me to marry one of his cronies, I run away to my half-brother’s home.

He’s the black sheep of the family, a biker, not an Irish mobster. At the Satan’s Sinners’ MC compound, I find more than I bargained for.

Not my brother, ironically, but a man who gives a whole other meaning to ‘white knight.’

He’s dark and mysterious, a seeker of answers and a finder of truths.

Even better? He offers me an out, a shotgun wedding in Vegas.

I just don’t realize he has an ulterior motive.

But he doesn’t know I have one too…

Amanda Thomas is hopelessly in love with Jackson Paris, but he will never see her as anything more than his sweet and innocent bestie. After being virgin-adjacent for too long, Mandy is officially ready to move on. She wants to learn about hot, dirty sex, so she joins an online dating app where the enigmatic Mr. Dark promises to fulfill all of her wicked fantasies…

Jackson Paris has been keeping secrets from his stunning, too-innocent best friend—like forbidden sexual proclivities and his membership at the exclusive Black Rose Underground club. But Mandy has decided she needs an education—the filthy kind. As Mr. Dark, Jackson can safely give her a taste of what she wants—and deter her from pursuing more—without revealing his identity.

But in the dim, provocative atmosphere of Black Rose Underground, there are no secrets. Here, every wicked appetite is satisfied. And for the first time, Mandy will discover who her best friend really is…just in time to shock him with a secret of her own.

Forget Me Knot by Elizabeth Hayley

Owen Parish and Veronica Diaz have always seemed to do things backward: living together before they began dating, dealing with an annulment before they were even engaged, breaking the law to win the approval of family. But life has always had a way or working out. Until now.

When it comes to light that Owen not only inherited a house from Minnie but also a debt that came along with it, he and Vee are lost as to how save the one thing that’s been a constant through all of their ups and downs: their home.

The Scooby Gang seems to feel that every problem has a solution, and that there’s nothing they can’t overcome as long as they work together. But this may be one time when the power of snark and friendship can’t help them get what they need.

Find out what happens when a group of misfits comes together in the name of love and laughs in this final installment of The Love Game series.