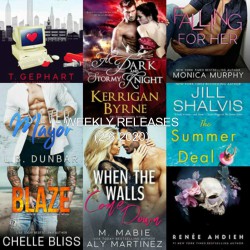 Falling for Her by Monica Murphy

From New York Times bestselling author Monica Murphy comes an angsty new adult romance about the popular quarterback and the smart girl who brings him to his knees.

Gorgeous. All the girls want him.

Quarterback. All the boys want to be his friend. He’s the most popular boy in the senior class.

And he hates me.

Or so I thought.

What I mistook for hatred turns out to be…interest. There’s that thin line, right? It makes me crazy. I can’t stand it. Attraction, chemistry, whatever it is, I also can’t resist it.

And neither can he.

Together, we make no sense. The odds are against us. His friends definitely don’t approve. I’m not a part of their crowd. Not one of the cool kids. I don’t fit in, or so they say.

But that doesn’t stop him from falling for me.

And it won’t stop me from fighting for him.

A Dark and Stormy Knight by Kerrigan Byrne

Sir Carlton Morley is famously possessed of extraordinary will, singular focus, and a merciless sense of justice. As a man, he secured his fortune and his preeminence as Scotland Yard’s ruthless Chief Inspector. As a decorated soldier, he was legend for his unflinching trigger finger, his precision in battle, and his imperturbable strength. But as a boy, he was someone else. A twin, a thief, and a murderer, until tragedy reshaped him.

Now he stalks the night, in search of redemption and retribution, vowing to never give into temptation, as it’s just another form of weakness.

Until temptation lands—quite literally—in his lap, taking the form of Prudence Goode.

Prim and proper Pru is expected to live a life of drudgery, but before she succumbs to her fate, she craves just one night of desire. On the night she searches for it, she stumbles upon a man made of shadows, muscle and wrath… And decides he is the one.

When their firestorm of passion burns out of control, Morley discovers, too late, that he was right. The tempting woman has become his weakness.

A weakness his enemies can use against him.

Following the events of The Beautiful, Sébastien Saint Germain is now cursed and forever changed. The treaty between the Fallen and the Brotherhood has been broken, and war between the immortals seems imminent. The price of loving Celine was costly.

But Celine has also paid a high price for loving Bastien. Still recovering from injuries sustained during a night she can’t quite remember, her dreams are troubled. And she doesn’t know she has inadvertently set into motion a chain of events that could lead to her demise and unveil a truth about herself she’s not ready to learn.

Forces hiding in the shadows have been patiently waiting for this moment. And just as Bastien and Celine begin to uncover the danger around them, they learn their love could tear them apart.

The Damned, Renée’s latest installment in The Beautiful series is just as decadent, thrilling, and mysterious as her last, as she continues her most potent fantasy series yet.

Lily Gallo prided herself on her pristine reputation.
A dedicated bookworm.
An awkward goody-two-shoes.
Lover of fiction more than reality.

Jet Michaels had always had a broken moral compass.
A cocky egomaniac.
An unashamed womanizer.
Craving adventure instead of responsibility.

Lily never expected to come face-to-crotch with her old high school crush, and she never dreamed he’d make her an offer she couldn’t refuse. But what was supposed to be a platonic arrangement quickly spiraled out of control.

Can the inexperienced nerdy girl tame the notorious player?
Or will he peel back her pages, exposing the wildcat hidden underneath?

The Summer Deal by Jill Shalvis

Brynn Turner desperately wishes she had it together, but her personal life is like a ping-pong match that’s left her scared and hurt after so many attempts to get it right. In search of a place to lick her wounds and get a fresh start, she heads back home to Wildstone.

And then there’s Kinsey Davis, who after battling serious health issues her entire twenty-nine years of life, is tired of hoping for . . . well, anything. She’s fierce, tough, and she’s keeping more than one bombshell of a secret from Brynn — her long-time frenemy.

But then Brynn runs into Kinsey’s best friend, Eli, renewing her childhood crush. The good news: he’s still easy-going and funny and sexy as hell. The bad news: when he gets her to agree to a summer-time deal to trust him to do right by her, no matter what, she never dreams it’ll result in finding a piece of herself she didn’t even know was missing. She could have real connections, possibly love, and a future—if she can only learn to let go of the past.

As the long days of summer wind down, the three of them must discover if forgiveness is enough to grasp the unconditional love that’s right in front of them.

When the Walls Come Down by Aly Martinez & M.Mabie (Live 6.4)

Did you ever hear the joke about the guy whose wife cheated on him with his best friend? So he quit his job, moved into his parents’ basement, and gained fifty pounds?

No? Because that wasn’t a joke. It was my life.

Four years later, I’m back with a dream job, a killer apartment, and a set of abs that are better than ever.

So, when Maggie Light, a stunning, snarky blonde moves in next door, and we spend the hottest weekend of our lives together, I think this could be the greatest comeback story ever.

That is until I realize Maggie has moved to town to do one thing—steal my job.

What I never anticipated was that maybe I’d rather win her.

Perhaps, if I’m lucky, the universe has finally run out of jokes and I can somehow win both.

Charlie Harrington has always been the good one.
Loyal to his town as the mayor. Loyal to his family as the youngest son.
So there comes a time when every good man needs to be a little bad.

What’s the worst present you can get for your 45th birthday? An online dating profile you didn’t want. And Mack was all set to delete it, until a message from Hayden lands in his inbox.

Hayden decided the best way to celebrate ending a long, loveless marriage was to have a one-night stand. Pity she didn’t count on a sexy, fire chief foiling her plans.

Neither of them wanted a relationship, such a shame fate didn’t get the memo