Elena's Bookblog > New releases > Weekly Releases for the week of May 14th, 2019 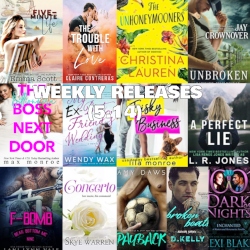 Noah Hathaway is infuriatingly hot, annoyingly charming… and my new room-mate?! This pet-sitting gig was supposed to be a vacation from drama, but that was before the hunky guy in the pool-house started sticking his nose (and his annoyingly chiseled abs) in my business.

I’m looking for Mr. Right, not Mr. Most Likely to Sneak Out of Bed (And Steal Your Breakfast Pop Tart On the Way Out the Door), so despite the red-hot sparks between us, I’m determined to stay away. But when one little party gets way out of hand, we’re suddenly both on the wrong side of trouble. Unless we can come up with ten thousand dollars in the next three weeks, we’re screwed. And not just when it comes to the adorable pooches.

With the clock ticking, we have no choice but to team up and embark on a madcap scheme to save our asses – with the help of a few furry friends. But with the chemistry between us reading Defcon-69, can I keep my hands (and heart) to myself? Or will this pup-tastic scheme leave us both in the doghouse?

When rodeo star Crew Lawton loses everything in a bad bet, he has no choice but to take a new job to pay off his debts – even if it means becoming the face of an expensive male skincare line. Crew is used to getting sweaty and rustling in the dirt, not posing for photo shoots. And he’s certainly not used to being bossed around by a woman who doesn’t even know the difference between bulls and broncs. But Crew owes money to dangerous criminals, and he’ll do anything Della says in order to pay them back and keep them far away from his family in Loveless, Texas…
The launch of her new men’s line for her family’s company means everything to Della Deveaux, and she’s not willing to let some rugged, arrogant cowboy ruin her campaign. Crew Lawton is the last man she would have chosen to represent her chic, sophisticated brand. Unfortunately, her father already invested millions in Crew’s stupidly handsome face. Yet the more time they spend together, Della and Crew realize that opposites do attract. But when the time comes for Crew to face his past mistakes, will he be able to protect his family…and the woman he’s come to love?

You murder a man, and all of a sudden people are scared of you.

Slate Solis went from being a guy that people went to in times of need to an ex-con that people crossed the street to avoid being too close to.

He knows he’s done wrong, but out of all of his sins, only one really bothers him—coveting thy neighbor’s wife.

After seeing her for the first time while he was in prison, she’s stayed on his mind for three long years. Each time she comes in to visit with her friend on family day, he can’t help but stare.

Then the day comes that he’s set free, and he’s almost disappointed that he’ll never see her again.

Except fate has different plans.

He hasn’t been back in his house for more than three hours when he sees her.

Harleigh Belle in all her glory…oh, and her husband that is everything Slate isn’t.

He tells himself that her being fifty feet away from him, all day every day, is a complete coincidence. One that he shouldn’t take advantage of. The more time passes, the harder it gets to stay away. Until one day, and one very ill-timed thunderstorm, ruin everything.

Who knew that baby-making-weather was a real thing?

The Unhoneymooners by Christina Lauren

Olive Torres is used to being the unlucky twin: from inexplicable mishaps to a recent layoff, her life seems to be almost comically jinxed. By contrast, her sister Ami is an eternal champion . . . she even managed to finance her entire wedding by winning a slew of contests. Unfortunately for Olive, the only thing worse than constant bad luck is having to spend the wedding day with the best man (and her nemesis), Ethan Thomas.

Olive braces herself for wedding hell, determined to put on a brave face, but when the entire wedding party gets food poisoning, the only people who aren’t affected are Olive and Ethan. Suddenly there’s a free honeymoon up for grabs, and Olive will be damned if Ethan gets to enjoy paradise solo.

Agreeing to a temporary truce, the pair head for Maui. After all, ten days of bliss is worth having to assume the role of loving newlyweds, right? But the weird thing is . . . Olive doesn’t mind playing pretend. In fact, the more she pretends to be the luckiest woman alive, the more it feels like she might be.

The spotlight lands on Samantha Brooks. Years of practice build to the opening night of a global tour. She plays her heart out, but there are darker forces underneath the stage.

There are eyes watching from the wings.

Liam North fights to keep her safe with every weapon he owns. She’s his greatest pride—and his greatest weakness. The danger comes from somewhere no one expected. Betrayal threatens to destroy everything he’s built. His business. His family. His life.

When the curtain falls, only one of them will be left standing.

Prized and stored away for safekeeping, the timeless ivory wedding dress, with its scooped neck and cleverly fitted bodice, sits gently folded in its box, whispering of Happily Ever Afters. To Kendra, Brianna, and Lauren it’s a reminder of what could have been, the promise of a fairy tale, and a friendship torn apart. But as Kendra knows firsthand: it wasn’t the dress’s fault.

Once closer than sisters, Lauren and Bree have grown up and grown apart, allowing broken promises and unfulfilled dreams to destroy their friendship. A successful author, Lauren returns home to the Outer Banks, fiancé in tow, to claim the dress she never thought she’d wear. While Bree, a bookstore owner, grapples with the realities of life after you marry the handsome prince. As the former best friends wrestle with their uncertain futures, they are both certain of one thing: some betrayals can never be forgiven.

Now on the eve of her daughter Lauren’s wedding, Kendra struggles with a secret she’s kept for far too long. And vows to make sure the dress will finally bring Lauren and Bree back together—knowing they’ll need each other to survive the coming storm.

Single father
Widower
Retired
Three things I never thought I’d be by thirty, yet all my daily reality.
This is not the life I would have chosen, but it’s the hand I’ve been dealt.
I love my daughter.
I loved Belle.
I’m not interested in more heartache.
Relationships are a thing of the past.
Until I meet her –
She’s the awakening I desperately need, but one I’m not sure I deserve.

Everything happens for a reason.
Time heals all wounds.
You’re too young to give up on love.
They say that, but they’re wrong.
My world crumbled when my fiancé died.
Then I met him –
He’s flawed in the same ways.
Broken in the same places.
Scared of the same things.
He looks at me like I’m his salvation.
And I want to be, but an open heart means risking a broken one.

Broken Beats is the second spin off novel of The Illusion Series. This book can be read as a stand-alone novel but the characters from the previous books do intersect and there will be spoilers from the earlier books.

I’m Hailey Anne Monroe. I’m twenty-eight years old. An artist, who found her muse on the canvas because I wasn’t allowed to have friends or even keep a journal. And yes, if you haven’t guessed by now, I’m that Hailey Anne Monroe, daughter to Thomas Frank Monroe, the man who was a half-percentage point from becoming President of the United States. If you were able to ask him, he’d probably tell you that I was the half point. But you can’t ask him, and he can’t tell you. He’s dead. They’re all dead and now I can speak.

The Trouble with Love by Claire Contreras (Live 5.15- No Preorder)

Things on my wishlist:

1. Got a job in my dream tech company
2. Created a workplace dating app for said company
3. Was matched with Bennett, who happens to own the company and is also my brother’s best friend

They say when it rains, it pours, but this is some serious BS. It doesn’t help that Bennett was the man I had my last one night stand with. It definitely doesn’t help that he seems to want me just as much as I want him. The issue is, he won’t do anything about it, but then we’re forced to attend a tech conference in Vegas and I think it may just be what I need to turn this thing around.

New goal: get my brother’s best friend out of my system by all means necessary.

A Five-Minute Life by Emma Scott (Live 5.16- No Preorder)

A car accident stole her parents and left her with the second-worst documented case of amnesia in the world. She now has only minutes of experiences, of consciousness, of life…before her memory is wiped clean. The once effervescent artist with a promising future is reduced to scribbling with pens and paper, living an empty, quiet life, three hundred seconds at a time.

Jim Whelan is on autopilot.

A foster kid shuffled around the system since birth, he’s lived his entire life without knowing love…and it’s taken its toll—until he learned to fight back, carry his armor, and keep his head down.

When Thea has the chance to break free of her five-minute prison with a risky, experimental surgery, it could lead them both to an epic love they never thought possible… or one that could require the ultimate sacrifice.

A Five-Minute life contains subject matter that might be sensitive to some readers.

The Billionaire Boss Next Door by Max Monroe (Live 5.16- No Preorder)

My new boss has it all. In spades.

Too bad I haven’t started out on the best foot.

My big mouth has already turned him against me, and tempting good looks and success aside, Trent Turner is no peach either. He’s stubborn and thick-headed, and son of a fruitcake, he thinks he knows everything there is to know about the hotel business.

With him running the development of the new Vanderturn New Orleans Hotel and me doing the design, our work relationship is far too intimate for two people who absolutely despise one another.

But that’s not all.

See, he isn’t just my billionaire boss from hell. He’s my new neighbor, too.

Trent Turner is my billionaire boss next door.

ALLIE HARRIS WANTS PAYBACK.
Her cheating ex deserves to see her living her best life; a one-night-stand with a hot South African soccer player would be the perfect revenge. Right?

Wrong. Allie is so, so wrong.

ROAN DEWALT HAS ALL THE MOVES.
On and off the field he’s at the top of his game. Roan respects hard-work, dedication—and follow through. He’s not a one and done kind of man, and he’s far from being done with Allie Harris.

One sexy night and two years later, Allie’s job brings her back to town. An opportunity for the perfect replay Roan has been fantasizing about since they slept together.

THE PROBLEM?
Allie Harris has a secret; one she’s been keeping from Roan all this time. Video proof of their one night together—taken without his consent.

Will Allie’s payback plan come back to bite them both? Or can she erase her past mistake and embrace a new future with Roan?(