Elena's Bookblog > New releases > Weekly Releases for the week of May 17th, 2022 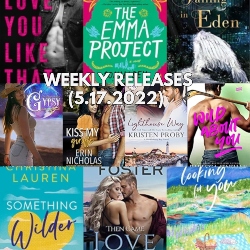 Zoe Atkins wanted exactly one thing. To be the world’s greatest percussionist. Instead, she’s on a tour bus engaged in a stupid bet with rock star, Alex King, trying to fill the hole left behind when her dream gave up on her.

The prickly former percussionist wasn’t supposed to steal his heart. With her distrust of lipstick and love of men’s pyjamas, she was everything playboy, Alex, didn’t want in a lover. At least, that’s what he thought when he bet her he could find her a hook up during their tour.Until he’s forced to watch the woman he’s come to desire leave the bar with her perfect guy, taking a piece of his already bruised and battered heart with her.

Now it’s up to the Sad Fridays’ rocker to use his passionate powers of persuasion to convince Zoe he’s more than her wingman. He’s her everything.

Luna Winchester’s life is firmly entrenched in the coastal town Huckleberry Bay, Oregon. A fourth-generation light keeper, Luna is carrying on the Winchester tradition by tending to the lighthouse. Plus, she’s decided to renovate a long-abandoned building on the property and make it a B&B, Luna’s Light. Surrounded by family and her two childhood best friends, her life is full.

Wolfe Conrad is in hiding, and he’s come to Huckleberry Bay to heal. A career ending accident on the track nearly took his life, and now he seeks refuge to try and build a new one. The quaint town’s slow pace rattles the man who’s first love is fast cars—and then there’s the beautiful innkeeper, who rattles him in different ways.

Falling in love with Luna definitely isn’t part of Wolfe’s plan. Local legends that tell of unrequited love and despair? Unbelievable. But stranger things have happened, like two strangers falling in love…

Wild About You by Rebecca Jenshak

A month ago, I was a rookie with the best stats in the league. I was traveling the world, playing hockey, and making more money than I ever dreamed.

Then my sister showed up on my doorstep with nowhere else to go.

I don’t know the first thing about being responsible for a troubled teen, and the team jet isn’t exactly kid-friendly.

Smart, nurturing, and just as beautiful as I remember.

Too bad she hates my guts.

And this time, I’m not letting her go.

Wild About You is a full-length second chance romance with a grumpy NHL player, his teenage sister, and the ex-girlfriend he never forgot.

The Wildcats are the youngest team in the NHL. On the ice, they’re cocky, determined, and ready to take the league by storm. Off the ice? They’re always up for a wild time.

Falling in Eden by Willow Aster

Star-crossed lovers who are given a second chance…

Phina wakes up in a beautiful place that feels familiar, but she doesn’t remember how she got there. When she’s told she survived a plane crash, it feels true, but all the details are blurry.

A gorgeous, grumpy stranger owns the house where she’s recovering, and she’s drawn to him, but everything about him confuses her. His elusive answers. The way he disappears right when they’re connecting. The dreams she has of the two of them when they were young.

The longer she’s there, the more comfortable she feels in her new home, and the more she falls for Nial.

But her past begins to catch up with her, and it’s beyond anything she ever imagined.

Legends and Lovers is a collection of dark legends, and star-crossed love stories, from 20 best-selling authors. Woven with mystery and magic, love and lore, romance and suspense, this multi-author collaboration promises to make your heart pound and keep you reading late into the night.

The Emma Project by Sonali Dev

No one can call Vansh Raje’s life anything but charmed. Handsome—Vogue has declared him California’s hottest single—and rich enough to spend all his time on missions to make the world a better place. Add to that a doting family and a contagiously sunny disposition and Vansh has made it halfway through his twenties without ever facing anything to throw him off his admittedly spectacular game.

A couple years from turning forty, Knightlina (Naina) Kohli has just gotten out of a ten-year-long fake relationship with Vansh’s brother and wants only one thing from her life…fine, two things. One, to have nothing to do with the unfairly blessed Raje family ever again. Two, to bring economic independence to millions of women in South Asia through her microfinance foundation and prove her father wrong about, well, everything.

Just when Naina’s dream is about to come to fruition, Vansh Raje shows up with his misguided Emma Project… And suddenly she’s fighting him for funding and wondering if a friends-with-benefits arrangement that’s as toe-curlingly hot as it is fun is worth risking her life’s work for.

Something Wilder by Christina Lauren

Growing up the daughter of notorious treasure hunter and absentee father Duke Wilder left Lily without much patience for the profession…or much money in the bank. But Lily is nothing if not resourceful, and now uses Duke’s coveted hand-drawn maps to guide tourists on fake treasure hunts through the red rock canyons of Utah. It pays the bills but doesn’t leave enough to fulfill her dream of buying back the beloved ranch her father sold years ago, and definitely not enough to deal with the sight of the man she once loved walking back into her life with a motley crew of friends ready to hit the trails. Frankly, Lily would like to take him out into the wilderness—and leave him there.

Leo Grady knew mirages were a thing in the desert, but they’d barely left civilization when the silhouette of his greatest regret comes into focus in the flickering light of the campfire. Ready to leave the past behind him, Leo wants nothing more than to reconnect with his first and only love. Unfortunately, Lily Wilder is all business, drawing a clear line in the sand: it’s never going to happen.

But when the trip goes horribly and hilariously wrong, the group wonders if maybe the legend of the hidden treasure wasn’t a gimmick after all. There’s a chance to right the wrongs—of Duke’s past and their own—but only if Leo and Lily can confront their history and work together. Alone under the stars in the isolated and dangerous mazes of the Canyonlands, Leo and Lily must decide whether they’ll risk their lives and hearts on the adventure of a lifetime.

From the author of the “heartfelt and funny” (Publishers Weekly) sensation The Unhoneymooners, this page-turning adventure full of second chances, complicated relationships, and the breathtaking beauty of the American Southwest will take fans on one wild ride

Looking for You by Kelly Elliott

The last person I would ever expect to be waiting on the front porch for me in the middle of the night was Everly Higgins. To say I was both surprised and thrilled to see her would be an understatement. I hadn’t been able to stop thinking about her since we met last fall when my sister, Greer, fell in love with Everly’s brother, Hudson.

When I see her bruised up face, I instantly want to hurt someone. The problem is, Everly won’t tell me who hurt her or who she’s running from. The only thing she’ll tell me is that she needs a safe place to stay where no one can find her.

Being a cop, I have the urge to unravel this mystery, but the other side of me simply wants to protect Everly from whatever it is she’s running from.

But as the people she is hiding from catch up with her, I quickly discover there is nothing I wouldn’t do for Everly Higgins.

I’d even die for her.

Kiss my Giraffe by Erin Nicholas

Enemies to friends to almost lovers…then back to kind-of enemies…to lovers. For a guy who wanted to keep things simple this is anything but.

Fiona knew Knox would be mad when she moved in next door.

And not because she brought a collection of wild animals with her.

And she was right.

So she intended to leave him alone. Mostly.

But he’s not ignoring her. He’s actively working to send her and her “ridiculous menagerie” (rude) right back out of town.

Still, as hard as she tries, it’s impossible to stop thinking about the small town grump’s long hair and tattoos and that mouth.

Not the one that’s almost always set in a grim line and says things like, “you got a permit for that?”

Nope, the one that kisses her like she’s everything he’s ever wanted and says very dirty things in her ear. And sweet, protective, supportive things. Sometimes. Accidentally. When she catches him off-guard.

The one that also says he only wants a long-distance fling with her. Nothing serious. And that he never dates women he sees every day. Like his neighbor.

Well, fine. If he doesn’t want her—and her unbelievable past and that-can’t-be-real future—then she doesn’t want him either. He can just kiss her…giraffe. (Yeah, she actually has a couple of those.)

Now she just needs to convince her heart to give him up.

What happens when you find your soul mate but she belongs to someone else?
Months ago, famed wedding-gown designer Jax Braden met the woman of his dreams when a bride-to-be came in for a consultation. He’s tried to move on, but there is no forgetting beautiful, smart, and refreshingly real Jordan Lawler, or the loneliness she cleverly tries to hide. When Jordan hires him to design her wedding gown, Jax knows he’s in trouble, but he cannot walk away. As business meetings turn to late-night confessions, their connection deepens, igniting passion too strong to deny. They’re drawn into an inescapable and forbidden love. Loyalties are tested and hearts are frayed, but neither will cross that invisible line in the sand. Come along for the sexy, emotional ride as Jax and Jordan face their toughest competitors yet—their hearts.

Born into a family of travelers, Gypsy leaves Ireland to meet her cousin who works in a traveling carnival, 3,000 miles away across the Atlantic.
She has a special gift for healing wounded hearts, and hopes to heal her own.
As she travels through America, she meets people on the journey who need her special help – a lovelorn waitress, a runaway boy, and a brooding mechanic who’s as lost and lonely as Gypsy.
Against the carnival’s backdrop of sawdust and stardust, they travel west, searching for love, and a family that they can build for themselves.