Elena's Bookblog > New releases > Weekly Releases for the week of May 19th, 2020 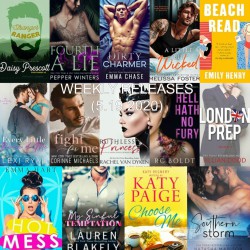 Fight for Me by Corinne Michaels

I fell in love with Sydney Hastings when I was ten years old.
At sixteen, we whispered promises of forever.
When I was twenty-two I broke them all. I left her and promised never to return.

After my father’s death, I’m forced to go home to Sugarloaf for six months. She’ll be everywhere, no longer just in my memories and regrets.

When we’re together, it’s as though time never stopped. She’s still the one I want, but I don’t deserve her. Instead of apologizing, I take that beautiful, broken woman in my arms. But after that, it’s her turn to leave me.

Now I have to fight. For her. For us. For the life we both want …

Choose Me by Katy Paige

When Trend magazine contracts Lindstrom & Sons to manage a fashion shoot in Yellowstone, nature-loving tour guide Lars Lindstrom rolls his eyes. Babysitting a supermodel’s assistant sounds like a bore when he’d rather be leading a fly fishing expedition or tracking a new wolf pack.

Little does Lars know that Jane Mays, said supermodel’s smart-mouthed assistant and cousin, will be the most exciting person he’s ever met. Her smoky voice and surprisingly sweet heart is about to rock his world.

Jane’s life has known a lot of heartache, but Lars is unexpectedly knocking down walls faster than she can put them up. From loving the same music to their effortlessly sexy sparring, Jane and Lars can’t seem to get enough of each other…until sexy supermodel Samara blows into town.

Used to living in her cousin’s shadow, Jane knows the likelihood of Lars becoming another notch in Samara’s bedpost. In the past, maybe she would have stepped aside. But this time. she’ll find the strength to stand up to Samara once and for all…and trust that Lars will be there to catch her if she falls.

Fourth A Lie by Pepper Winters

“There was a truth once. Truth we shared in the dark and scribed scars upon our hearts.
There was a lie once. A lie that shattered our hard-earned truth apart.”

Eleanor Grace did the unbelievable. She fell for a man who trades in women, dabbles in myth, and has the morals of a cold-hearted beast. However, love isn’t enough where past sins are concerned, and only pain can follow.

Sully Sinclair did the impossible. He gave his trust to a goddess who has the ultimate power to break him. Unfortunately, paradise is just an illusion, his islands aren’t impenetrable, and now he has to pay the price.

A war they can’t stop.

A future that doesn’t bow to fate.

Savannah
I’m the one who broke up the golden couple. The woman people still whisper about, point at, and give dirty looks to.

Did I believe that he was going to marry me? Wholeheartedly.

Did he? Not even close. He got engaged right in front of me and then his father threw two hundred dollars at me and told me to take the trash out.

So, I raised my son in a town where people love him because they think that his father is the sheriff.

It was going great, everything was working out till my lie got out.

I was getting ready to take over the mayoral office from my father, who was my hero.

Until I heard the secret he hoped would stay buried forever.

My brother has a son, not just any son but a son with the woman who was my best friend.

The woman I secretly have loved from the moment she stood up to me and broke my nose in kindergarten.

I need to protect her and in order to do that, we need to get married.
Too bad her nightmare is my dream come true .

Augustus Everett is an acclaimed author of literary fiction. January Andrews writes bestselling romance. When she pens a happily ever after, he kills off his entire cast.

In fact, the only thing they have in common is that for the next three months, they’re living in neighboring beach houses, broke, and bogged down with writer’s block.

Until, one hazy evening, one thing leads to another and they strike a deal designed to force them out of their creative ruts: Augustus will spend the summer writing something happy, and January will pen the next Great American Novel. She’ll take him on field trips worthy of any rom-com montage, and he’ll take her to interview surviving members of a backwoods death cult (obviously). Everyone will finish a book and no one will fall in love. Really.

Abigail Haddock is stunning, sensible, and some would say…stuffy. But it’s not really her fault. She was raised in one of Wessco’s oldest, most affluent, aristocratic families—“stuffy” is their middle name. So is successful. Abby’s working overtime to distinguish herself as a top-notch physician, just as her family legacy demands.

She doesn’t have time for nonsense.

Tommy Sullivan’s all about nonsense.

Sure, he’s an elite bodyguard with lethal skills and co-owner of the renowned, S&S Securities Firm—protector of the wealthy and titled. But he’s also rowdy, fun and thoroughly irresistible.

Tommy knows how to have a good time, and he’s never seen someone more in need of a good time than Abby. The lass needs long, wet, filthy kisses—STAT—and he’s just the man for the job.

It doesn’t take long for a wildly sexy, sinfully satisfying, no-strings attached arrangement to turn into something more. Something sweet and addictive and real. But Tommy and Abby are too royally stubborn to admit it.

Opposites attract, everyone knows that. But can their red-hot relationship last—can they love…for forever?

Every Little Piece of Me by Lexi Ryan

The first time I saw Brinley Knox, she was crying, draped in a ridiculous pink tulle dress for her sweet sixteen, and cursing the boy who’d broken her heart.

I was the hired help, a teenage charity case.

She was the daughter of the wealthiest family in Orchid Valley.

I knew a girl like Brinley was off-limits. That didn’t stop me from kissing her. Or from promising that if she were ever mine, I’d never let her go.

The last time I saw Brinley, she was sleeping, tangled in the sheets of my Vegas penthouse, my diamond glittering on her finger.

I returned three hours later to an empty bed, the ring on the dresser, and a goodbye note.

We haven’t spoken in the six months since, but I’m not the kind of guy who’d file for a divorce he doesn’t want.

Until I got this damn invitation, it never occurred to me that Brinley didn’t remember our impulsive Vegas nuptials.

It’s time to return to Orchid Valley and remind the bride-to-be that I’m a man who keeps his promises.

New park ranger Daphne Baum is a reformed good girl. Breaking free from her overbearing family as soon as she turned eighteen, she’s been on her own ever since. The life of a park ranger, moving from park to park, suits her just fine. Though still a rule follower, she’s okay with a little sin in her life.

Every generation of Hill men has its black sheep. The general consensus among the family is that Odin Hill is the lucky bastard this go around. At seventeen, he blew out of town like an angry tornado only to return fifteen years later withdrawn and secretive. Living like a recluse in the hollows in the Smoky Mountains, he’s happy to keep to himself and is content to let locals believe he’s the town weirdo. Odin prefers the company of his pet pig to the nosy citizens of Green Valley.

When Daphne discovers Odin might be committing nefarious deeds on park land, she vows to find out the truth behind the handsome, yet chaotic, loner. Will the stranger help the ranger discover the difference between being good and doing the right thing? Or will they find themselves on opposites sides of love?

‘Stranger Ranger’ is a full-length contemporary romance, can be read as a standalone, and is book #2 in the Park Ranger series, Green Valley World, Penny Reid Book Universe.

The enemy of my enemy is my friend…
I never thought my father would ask this of me, to become the second generation at Eagle Elite University, to rule with an iron fist, and to take care of anyone who gets in our way.
But ever since the incident.
Ever since Him.
There’s been a war in our little clique.
After all, a house divided cannot stand.
He’s the problem, not me.
He used to kiss me like I was his oxygen.
Now he looks at me like I’m his poison.
But we both drank it, again and again, never believing there would be a day when our love would start a war.
And our friendship would shatter into a million pieces.
Then again, the worst thing you could do in the mafia is hang on to hope that your life will be normal.
The second worst thing?
Fall in love with your best friend.
Enemy.
And heir to the Nicolasi throne.

What do you do when the whole world has seen you getting down and dirty in a broom closet?

I, Elle Evans, am on the run.
Not from the fuzz—although that would be more exciting.
No, I’m on the run from the four-year-old private tape that, thanks to my vengeful ex, has probably already ruined my vlogging career.
There’s nothing like the entire world knowing what you look like mid-O.
Creek Keys, Florida, is a million miles away from NYC and the perfect place for me to hide for the rest of summer until I can figure out what I’m going to do.
Something that’s easier said than done since my new landlord’s daughter thinks you’re God’s greatest gift. Even better? Their beach house is right next to the one I’m renting, so there’s no getting away from her—or her hot, British dad.
Who most definitely does not think I’m role model material.
He might be right.
The problem is that neither of us can say no to her.
Or each other.

My Sinful Temptation by Lauren Blakely

Just because you want a woman doesn’t mean you get to have her.I’ve been lusting after Mindy Gamble since the night I met her, but romance was never in the cards. Working to crack a case was the only order of the day. Now, a year later, she’s one of my closest friends. The feisty, no-nonsense, sexy-as-hell blonde that I just want to slap my handcuffs on and do bad things to. I resist though, since I need her too much as a friend. Until the night all my resistance cracks, and we fall into bed together. And I start thinking we can maybe find a way to make this work. Until she tells me she’s leaving town…

Seven years ago, they took everything from me. My father. My husband. My child.
When they stole my chance at justice, I vowed to get revenge.
Then I met him.
He tempts that long-lost part of me, but his presence is a reminder that betrayal lurks around every corner.
Their biggest mistake is underestimating my commitment for vengeance.
They don’t realize that when it comes to a woman like me, hell hath no fury.

London Prep—where the boys are as cute as their accents.