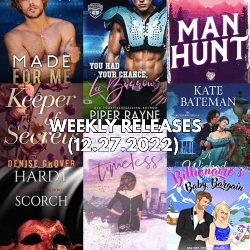 Aubrey Kendrick has dedicated her life to continuing the family legacy. Her time isn’t just money, it’s millions. A workaholic? Yes. According to her ex, she’s married to her job. Is her personal life dull? Maybe. Is her penthouse rather lonely? There’s no time to answer that question.

Too many men have asked her to sacrifice her success to pacify their fragile egos. She’d rather be single than stifled.

Until Landon McClellan strolls into her office and upends her life. He’s as infuriating as he is handsome. He believes spontaneity keeps life interesting and is only happy if he’s rattled her nerves.

Landon is every distraction she cannot afford. But maybe he’s everything she needs.

You Had Your Chance by Piper Rayne

Oh, but don’t forget, he’s also a lying, heartless egomaniac who broke my heart in college.

It took me years to build myself back up after his deceit, and now I have the dream opportunity to prove myself working as a sports therapist for a professional team.

The hurdle? Or mountain to be more accurate…
The job is with the San Francisco Kingsmen.

Back when I was a naïve college girl, I felt lucky that he even noticed me. Now eight years later, he’d be lucky if I gave him the time of day.

Which I won’t. Not ever.

Some people don’t deserve a second chance and Lee Burrows is one of them.

Now if someone could only tell him that because he’s hell-bent on scoring the winning touchdown and won’t accept that it’s game over for us.

After nearly losing her father to a heart attack, Rory Pike realizes life is fragile. So once her dad is on the mend, she jumps at the chance to live out her dreams. She joins her brother’s rock band on a mini tour, and while fronting them may not be her passion, at least she’ll be singing, and it’ll help keep her from worrying about her boyfriend’s mysterious investigations in Wyoming.

Brock Steel hates being away from Rory, but he has no choice. Felonies—heinous felonies—have been committed on Steel land, and he vows that his family won’t go down for someone else’s crimes. Brock solves bits and pieces of the cryptic series of events, but many of his questions remain unanswered.

The Steel family is under attack by an invisible enemy, and Brock will do anything to protect his family and fight for a future with Rory.

Oops…too late. But in my defense this is all Nancy’s fault. If she hadn’t asked me to be her sperm donor while wearing that sexy red dress, I wouldn’t be in this mess.

But here I am, headed to an overnight New Year’s Eve party with my best friend. We’re supposed to be sledding and playing board games, but all I can think about is how much I want to taste every inch of Nancy–and give her that baby she’s longing for while I’m at it.

When we get to our room and find there’s only one bed, it feels like the universe is conspiring to turn us into friends with baby-making benefits.

But what happens when I realize the love I feel for this woman runs so much deeper than friendship?

Can a formerly naughty billionaire win the heart of the good girl next door, or will I end up facing midnight alone?

A Wicked Game by Kate Bateman

If there’s one thing impossible for a Davies to resist, it’s a challenge from a Montgomery. . .

Shipwrecked and imprisoned thanks to an incorrect map, Captain Morgan Davies has returned to London to exact sweet revenge on the cartographer responsible for his suffering. He’s also vowed to claim the winner’s prize—three kisses—in the bet he made with his long-time nemesis, the prickly, smart-mouthed Harriet Montgomery. His incarceration has clarified his feelings for her, but convincing the infuriating woman he wants to marry her is going to be his greatest challenge yet. When Harriet’s revealed to be the very mapmaker he seeks, Morgan decides to combine revenge and seduction into one delightful package. . .

Harriet’s always wanted witty scoundrel Morgan, and now he’s back; as handsome and as taunting as ever. She has enough on her plate dealing with her father’s failing eyesight and a rival mapmaker copying her work to play wicked games with a dastardly Davies—however tempting he might be. But when a threat from Morgan’s past puts them both in danger, Harry discovers that she and Morgan might not be enemies at all . . .

The final book in the Carly Moore series.

Carly had every intention of heading to Dallas to bring down her father, but not as Wyatt Drummond’s hostage. After Wyatt kidnaps her at gunpoint and threatens to turn her over to her father–the man she’s spent the past nine months hiding from–she explains that his plan will get them both killed. But then he has a surprising revelation she’s not sure she should believe.

Marco Roland is devastated when he realizes his girlfriend has been kidnapped, and he’ll do anything to save her. Even if it means crossing lines he never thought he’d breach.

And back in Drum, Tennessee, Max Drummond is forced to confront ugly truths about his family’s past and present.

With the help of old friends, Carly must decide who can best help her confront her father with proof of his lies and deceptions. If she doesn’t end up murdered first…

That was me. I did that. I might be a genius, but that was really dumb.
I sneak into the office to delete it, but it’s too late. He knows my naughtiest fantasies.
Instead of firing me, he wants to fulfill every one of them.
He’s everything I didn’t know I wanted: Older, fiercely protective and a possessive streak the size of Montana.
But can he really want someone like me with a past full of man struggles and a head full of math problems?

Find out the answer in this steamy small town romance where a nerdy heroine is outsmarted by a lumberjack-sized billionaire in a test of love. With all the books in the On A Manhunt series, it’s always open season on men.

Made for Me by Natasha Madison

From Wall Street Journal and USA TODAY bestselling author Natasha Madison comes a brand new stand-alone friends to lovers sports romance. A spin-off from the Only One series

Chase
Everyone expected me to play hockey.
I was good at it, but I was better at being a doctor.
So I hung up the skates and joined Doctors without Borders
But there is no place like home, so now I’m back.
And instead of being on the ice, I’m behind the bench as the team physician.
After years of playing cat and mouse, it’s time to admit it.
She’s mine.

Julia
Working as a social worker was a dream come true.
It wasn’t easy, and it has made me shut off my heart to love.
No commitment. No strings. No promises.
Until one fateful night changed everything.
He was there for me like no other one.
The biggest thing is I let him.
Maybe he was just made for me!