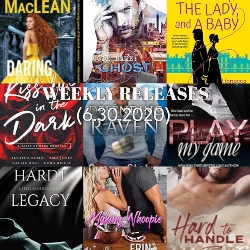 Daring and the Duke by Sarah MacLean

Grace Condry has spent a lifetime running from her past. Betrayed as a child by her only love and raised on the streets, she now hides in plain sight as queen of London’s darkest corners. Grace has a sharp mind and a powerful right hook and has never met an enemy she could not best…until the man she once loved returns.

Single-minded and ruthless, Ewan, Duke of Marwick, has spent a decade searching for the woman he never stopped loving. A long-ago gamble may have lost her forever, but Ewan will go to any lengths to win Grace back…and make her his duchess.

Reconciliation is the last thing Grace desires. Unable to forgive the past, she vows to take her revenge. But revenge requires keeping Ewan close, and soon her enemy seems to be something else altogether—something she can’t resist, even as he threatens the world she’s built, the life she’s claimed…and the heart she swore he’d never steal again.

Hard to Handle by K. Bromberg

At first, the request seemed simple—sign a new athlete to the agency.

Then I found out the new athlete was none other than the most wanted man in hockey today: Hunter Maddox

Gifted. Sexy. At the top of his game. And the only man who has ever broken my heart.

If signing him will help save our family business, I’ll swallow my pride and do what’s asked.

But when it becomes clear his uncharacteristic antics off the ice are a hint of something deeper, keeping things strictly professional between us becomes more than complicated. But I know better than to cross that line.

I’ll never date a client. Not even for him.
***
Win the Stanley Cup and do it before time runs out.

Not a small feat, but it’s what’s motivated me since the start of my career.

And time is running out.

Feisty. Dogged. Damn gorgeous. The one I let get away.

I have no idea why she’s traveling with the team, but hell if resisting her is going to be easy.

But I have a job to do, and I refuse to lose sight of that end game. Even if she confuses me. Even if she sees parts of me I’ve hidden from the world.

I can’t lose focus. Not even for her.

This marriage of convenience is about to get sticky.

Getting hitched for the health insurance is not Jocelyn Asher’s idea of romance.

But the hospital quote has really frosted her cookies, and suddenly, “I’m rich. We should just get married,” sounds a whole lot more swoony.

Especially when the man proposing is this gorgeous. And takes her to parties featuring champagne and petit fours. She’s a sucker for anything with bubbles or icing. And just like that she finds herself married to a near stranger.

So why did he ask the beautiful small-town baker he had a one-night stand with to marry him? Somehow watching her lick batter off a whisk–not a euphemism–made a wedding and a little fraud seem like a sweet idea.

They’ll just play house and make some whoopie–pies, of course–for a few months and then move on with their separate lives. Until then, bring on the cream filling. And that is a euphemism.

But as things heat up even outside of the kitchen, they quickly realize there’s no recipe to follow when it comes to love.

I knew the risks of this job when I signed on with Jameson Force Security. Knew my time as a marine would prepare me for the danger I would face. But no amount of training could have ever prepared me for the helplessness of watching my teammates die, the agonizing mental and physical pain of torture, or the despair of captivity.

Returning home to Pittsburgh following a mission gone wrong, I am riddled with guilt and haunted by nightmares. I spend my days trying to regain the parts of myself I lost in that desert, the pieces that made me the Malik Fournier I once was. While the physical effects of my torture are fading, the emotional ones are proving much more stubborn and I find solace from the last person I should ever seek such comfort.

Anna Tate lost even more than I did in that mission. Now a widow and a single mom to the daughter she gave birth to shortly after her husband’s death, Anna offers me comfort I don’t deserve. As my feelings for Anna grow, I worry that once she learns the truth about what happened, she’ll turn her back on me.

I pull her to me just as tightly as I push her away. Hoping this forbidden love will save me from the ghost I’ve become.

Brad Steel is in love. Daphne Wade is more than just his wife-to-be and the mother of his unborn child. She’s his destiny. Fate brought them together, and he vows to protect her. His determination doesn’t waver when he learns a secret about his bride—a secret she herself doesn’t know.

For the first time in a while, everything seems to be in sync for Daphne. She has loving parents, good friends, a man who adores her, a beautiful child growing inside her, and freedom from her anxiety and depression.

But is it an illusion?

When Brad is thrown into his family business sooner than he anticipates, he must divide his time among growing his legacy, keeping secrets, and solving unforeseen crimes. He’ll do anything to ensure Daphne’s safety and sanity.

A Duke, the Lady, and a Baby by Vanessa Riley

When headstrong West Indian heiress Patience Jordan questioned her English husband’s mysterious suicide, she lost everything: her newborn son, Lionel, her fortune—and her freedom. Falsely imprisoned, she risks her life to be near her child—until The Widow’s Grace gets her hired as her own son’s nanny. But working for his unsuspecting new guardian, Busick Strathmore, Duke of Repington, has perils of its own. Especially when Patience discovers his military strictness belies an ex-rake of unswerving honor—and unexpected passion . . .

A wounded military hero, Busick is determined to resolve his dead cousin’s dangerous financial dealings for Lionel’s sake. But his investigation is a minor skirmish compared to dealing with the forthright, courageous, and alluring Patience. Somehow, she’s breaking his rules, and sweeping past his defenses. Soon, between formidable enemies and obstacles, they form a fragile trust—but will it be enough to save the future they long to dare together?

Kiss Me in the Dark Anthology

KISS ME IN THE DARK compiles a selection of deliciously dark chapters from bestselling romance authors with additional, never-before-seen content. We’re hoping to introduce new readers to our world and also give our loyal readers a chance to get lost in the stories they love with these bonus scenes. It’s only a taste, just three chapters each…but it’s enough for you to get addicted and want more.

Play my Game by Lara Adrian

She stands out like a flame in the dark. Out of place in my orbit, she is a bright splash of color in an abyss of darkness. An innocent in a den of sin. And I, Jared Rush, am a master of corruption.

Like my paintings—dark, carnal images that have crowned me the king of the avant-garde art world while also making me a very rich man—I don’t flinch away from my baser instincts. And now, every one of those instincts is hungry for the fresh-faced beauty who made the mistake of wandering into my lair.

I don’t know her name yet, but that’s inconsequential. I know who she belongs to. And while she has nothing to do with the bad blood that’s been festering inside me for decades, I can’t help thinking about that old, unsettled score. I’m thinking about payback. And I already have a price in mind. One that begins with her.

When it comes to getting what I want, I always play to win. But in the end, will the cost of my vengeance be more than I can bear to lose?

It’s been ten years since Rex’s wife, Raven, disappeared from a Vegas casino. Never losing hope, he even formed the Mountain Mercenaries to help find her—and other missing wives, sisters, and children. Now Rex and his fearless team are following a lead to Lima, Peru, where the rescue operation is greater than they imagined.

A day at a time. That’s been Raven’s motto for a decade. Once held captive by an elusive sex trafficker, she has an indomitable will to survive. But Raven’s not ready to leave Peru. She can’t. Not yet. Because her liberation from the barrios comes with devastating consequences. One wrong move and all hope will be lost to an unimaginable hell.

For the Mountain Mercenaries, the stakes have been raised. The threats are escalating. But Rex hasn’t searched this long, risked so much, and come this far to lose Raven all over again.