Elena's Bookblog > New releases > Weekly Releases for the week of May 3rd, 2022 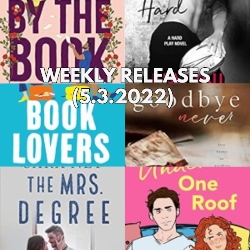 Under One Roof by Ali Hazelwood

Mara, Sadie, and Hannah are friends first, scientists always. Though their fields of study might take them to different corners of the world, they can all agree on this universal truth: when it comes to love and science, opposites attract and rivals make you burn…

As an environmental engineer, Mara knows all about the delicate nature of ecosystems. They require balance. And leaving the thermostat alone. And not stealing someone else’s food. And other rules Liam, her detestable big-oil lawyer of a roommate, knows nothing about. Okay, sure, technically she’s the interloper. Liam was already entrenched in his aunt’s house like some glowering grumpy giant when Mara moved in, with his big muscles and kissable mouth just sitting there on the couch tempting respectable scientists to the dark side…but Helena was her mentor and Mara’s not about to move out and give up her inheritance without a fight.

The problem is, living with someone means getting to know them. And the more Mara finds out about Liam, the harder it is to loathe him…and the easier it is to love him.

To read Sadie and Hannah’s stories look for the novellas Stuck with You and Below Zero, coming soon from Berkley!

Daniel Esera is a young god on the rugby field, a sexy and charming man who’s got the world at his feet. There’s just one problem: his sudden potent attraction to his number one nemesis–Catie River. No. Just no. Not happening.

Catie River is on her way to Paralympic gold, and she’s not about to allow Danny “Hotshot” Esera to derail her plans. Too bad her body isn’t cooperating. Even worse? Her heart might be coming along for the ride. No. Nope. Never.

The pair are united in their desire to remain enemies… until a stranger’s reckless action threatens both their careers. Now, the only way out for Catie and Danny is to pretend to be in a relationship. How bad can it be? They’re adults in full control of their hormones and their hearts. There will be no kissing. No PDA. And definitely no falling in love.

The Mrs. Degree by Sara Ney

I never thought I would get pregnant in college.

When I did, I thought leaving Jack Jennings was doing him a giant favor—he had a bright future ahead of him as a football star—the last thing he needed was me and a baby standing in his way of his dreams.

Honestly? I figured he would eventually forget about me.
I would raise our child in secret and watch Jack on television, and the pain of what I’d done to him would heal.
The last person I expected to see on my brothers doorstep seven years later was Jack; obviously, or I wouldn’t have answered it.
A superstitious athlete, dreams were keeping him awake at night that were preventing him from excelling on the field—dreams he was hoping I could make…disappear.
He looked so good. So much older.
Kind. Handsome.
Turns out, he hadn’t forgotten about me either, and he hadn’t put our past behind him.

All the best love stories are tragic. Ours is no different.

Lennon is the woman who should have always been mine. The one that I let slip through my fingers time and time again. I was young, stupid, and arrogant enough to think love would wait.

Being in the Marines has taught me patience. The enemy never strikes when you expect it. Love is the same way.

And falling in love with your best friend requires a special type of patience.

So when tragedy strikes, the only thing I can do is be what I’ve always been to her — her best friend.

I’ve learned everything has a cost — even love. Lennon has paid dearly.

But I’m not about to let tragedy steal our happily ever after.

Nora Stephens’ life is books—she’s read them all—and she is not that type of heroine. Not the plucky one, not the laidback dream girl, and especially not the sweetheart. In fact, the only people Nora is a heroine for are her clients, for whom she lands enormous deals as a cutthroat literary agent, and her beloved little sister Libby.

Which is why she agrees to go to Sunshine Falls, North Carolina for the month of August when Libby begs her for a sisters’ trip away—with visions of a small town transformation for Nora, who she’s convinced needs to become the heroine in her own story. But instead of picnics in meadows, or run-ins with a handsome country doctor or bulging-forearmed bartender, Nora keeps bumping into Charlie Lastra, a bookish brooding editor from back in the city. It would be a meet-cute if not for the fact that they’ve met many times and it’s never been cute.

If Nora knows she’s not an ideal heroine, Charlie knows he’s nobody’s hero, but as they are thrown together again and again—in a series of coincidences no editor worth their salt would allow—what they discover might just unravel the carefully crafted stories they’ve written about themselves.

By the Book by Jasmine Guillory

Isabelle is completely lost. When she first began her career in publishing after college, she did not expect to be twenty-five, still living at home, and one of the few Black employees at her publishing house. Overworked and underpaid, constantly torn between speaking up or stifling herself, Izzy thinks there must be more to this publishing life. So when she overhears her boss complaining about a beastly high-profile author who has failed to deliver his long-awaited manuscript, Isabelle sees an opportunity to prove her worth and finally get the recognition she deserves.

All she has to do is go to the author’s Santa Barbara mansion and give him a quick pep talk or three. How hard could it be?

But Izzy quickly finds out she is in over her head. Beau Towers is not some celebrity lightweight writing a tell-all memoir. He is jaded and withdrawn and—it turns out—just as lost as Izzy. But despite his standoffishness, Izzy needs Beau to deliver, and with her encouragement, his story begins to spill onto the page. They soon discover they have more in common than either of them expected, and as their deadline nears, Izzy and Beau begin to realize there may be something there that wasn’t there before.