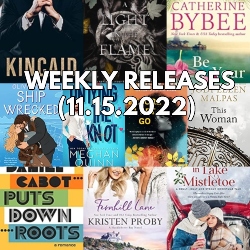 A Light in the Flame by Jennifer L. Armentrout

The truth about Sera’s plan is out, shattering the fragile trust forged between her and Nyktos. Surrounded by those distrustful of her, all Sera has is her duty. She will do anything to end Kolis, the false King of Gods, and his tyrannical rule of Iliseeum, thus stopping the threat he poses to the mortal realm.

Nyktos has a plan, though, and as they work together, the last thing they need is the undeniable, scorching passion that continues to ignite between them. Sera cannot afford to fall for the tortured Primal, not when a life no longer bound to a destiny she never wanted is more attainable than ever. But memories of their shared pleasure and unrivaled desire are a siren’s call impossible to resist.

And as Sera begins to realize that she wants to be more than a Consort in name only, the danger surrounding them intensifies. The attacks on the Shadowlands are increasing, and when Kolis summons them to Court, a whole new risk becomes apparent. The Primal power of Life is growing inside her, pushing her closer to the end of her Culling. And without Nyktos’s love—an emotion he’s incapable of feeling—she won’t survive her Ascension. That is if she even makes it to her Ascension and Kolis doesn’t get to her first. Because time is running out. For both her and the realms.

Before I Let Go by Kennedy Ryan

Their love was supposed to last forever. But when life delivered blow after devastating blow, Yasmen and Josiah Wade found that love alone couldn’t solve or save everything.

It couldn’t save their marriage.

Yasmen wasn’t prepared for how her life fell apart, but she’s is finally starting to find joy again. She and Josiah have found a new rhythm, co-parenting their two kids and running a thriving business together. Yet like magnets, they’re always drawn back to each other, and now they’re beginning to wonder if they’re truly ready to let go of everything they once had.

Soon, one stolen kiss leads to another…and then more. It’s hot. It’s illicit. It’s all good—until old wounds reopen. Is it too late for them to find forever? Or could they even be better, the second time around?

Untying the Knot by Meghan Quinn

Ryot Bisley is my husband.

Yes, the former third baseman for the Chicago Bobbies and absolute heart throb of the Windy City. That Ryot Bisley.

The first time I ran into him, he was grumpy, a horrific host, and left me on his sofa with nothing but a nylon baseball flag to use as a blanket.

The second time, he reluctantly bought me dinner, stared at my chest the entire night, and still sported that permanent frown.

The third time . . . well, that was a game changer. His smile captured me, his teasing charmed me, and his touches excited me.

So when he was called up to the majors that didn’t stop us from knocking it out of the park and all the way down the aisle.

Eleven years later…I’d love to say we’re happy as ever but the man who sent me dirty text messages every day is long gone and Mr. Frowny Face is back.

He’s so focused on trying to build a life after baseball that he doesn’t see the life we’ve already created together. . .so I make the hard decision and serve him divorce papers.

Problem is…my husband refuses to accept those papers. Instead, he has a new game plan that makes untying the knot of our marriage a little tricky. And just when I thought I wanted to be traded . . . he’s slowly, tantalizingly roping me back in.

Maria’s one-night-stand—the thick-thighed, sexy Viking of a man she left without a word or a note—just reappeared. Apparently, Peter’s her surly Gods of the Gates co-star, and they’re about to spend the next six years filming on a desolate Irish island together. She still wants him…but he now wants nothing to do with her.

Peter knows this role could finally transform him from a forgettable character actor into a leading man. He also knows a failed relationship with Maria could poison the set, and he won’t sabotage his career for a woman who’s already walked away from him once. Given time, maybe they can be cooperative colleagues or friends—possibly even best friends—but not lovers again. No matter how much he aches for her.

For years, they don’t touch off-camera. But on their last night of filming, their mutual restraint finally shatters, and all their pent-up desire explodes into renewed passion. Too bad they still don’t have a future together, since Peter’s going back to Hollywood, while Maria’s returning to her native Sweden. She thinks she needs more than he can give her, but he’s determined to change her mind, and he’s spent the last six years waiting. Watching. Wanting.

Be Your Everything by Catherine Bybee

With two protective older brothers and a traditional Catholic Italian mother, it’s surprising that Chloe D’Angelo can manage a date without someone in the family naysaying her romantic choice. And Dante Mancuso…oh, no. Her brother’s best friend is not a dating-app right swipe.

But when they are left unsupervised on a late night in Vegas, all of that changes. Add in a Vegas wedding chapel and a couple of “I dos” and Chloe wakes up with a ring on her finger and a hangover. Dating Dante was always a secret desire, but marriage? The rift that this news would cause in her family has both of them keeping their nuptials to themselves as they scramble to undo their Vegas mistake.

Dante knew the rules: Chloe was off-limits. Only, he can’t stop once his mind starts to believe she might be his forever. Just as their attraction deepens, Chloe flees to Bali, desperate to clear her head.

All Dante has to do is keep her brothers from killing him and convince Chloe that they are meant for each other. But first, Dante has to find her.

When Sarah Bitterman left Huckleberry Bay at the tender age of nineteen, newly married to a much older man, she had every intention of coming home to visit. Sadly, she quickly learned that was out of the question.

Until her husband throws her out with only the clothes on her back and finally sets Sarah free.

Coming back to the small seaside town has been the hardest thing she’s ever done. Facing those who loved her the most and think she turned her back on them is almost unbearable. But she needs her two best friends, and she’s longed to make amends with her little brother.

Huckleberry Bay is like the art in her soul. And now she can put down roots and begin to heal.

Tanner Hilleman knew it was a mistake to let the love of his life go all those years ago, and he’s never stopped thinking about her. Now that she’s home, while he’s giving her the space she needs, he’s also determined to make Sarah see that they belong together.

Unfortunately, Sarah’s past has followed her to Huckleberry Bay and threatens to destroy everything she loves. Will she and Tanner survive it? Or will it tear them apart for good?

Daniel Cabot doesn’t really know what he’s doing with his life. He’s lost faith in himself, his future, and maybe the world. The only things he knows that he cares about are the garden in the empty lot next to his crumbling East Village apartment building and his best friend.

Alex Savchenko has always known that he’s…difficult. Prickly, maybe, if you’re feeling generous. But maybe that’s the kind of personality it takes to start a low-income pediatrics clinic in one of Manhattan’s most troubled neighborhoods. When Daniel stumbles into his life, Alex doesn’t expect him to stay—most people don’t. And when Alex develops useless, inconvenient feelings for his new friend, he does what he’s always done, and tells himself that he isn’t feeling anything at all.

Daniel, though, has always worn his heart on his sleeve, and he isn’t stopping now.

Sometimes when things seem to be falling apart, it means there’s room for something incredible to grow.

This Woman by Jodi Ellen Malpas

Jesse Ward has stumbled through life drinking and indulging himself within the rooms of his high-class sex club, The Manor, numbing himself to the pain, grief, and guilt of his wrongs. Pleasure and alcohol are his medicine. Hedonism is all he knows.

It’s how he copes.

Until Ava O’Shea strolls into his office and knocks him back with her breathtaking beauty, ambition, and drive. It only takes one look into her eyes, one touch of her skin, and one word murmured, before his heart is kick-started, offering him something he never thought possible. A distraction from his daily torment. A semblance of peace.

Women never reject Jesse Ward. They fall at his feet, melt from his charismatic, devious smile, and obey his every salacious command. All except the one woman who unwittingly becomes his obsession and the only thing that can keep him from the brink of self-destruction.

He needs Ava and will do anything to have her.

Even hide every last skeleton in his large closet.

Because the truth could destroy them both.

Past and present weave together in Donovan’s point of view for the next chapter in Donovan and Sabrina’s life.

She was supposed to save me.

In a twist of fate, I rescued her. Since then, I’ve lived for her, breathed for her, overreached with my love.

She’s still here, so I must be doing something right. But now I want more.

Except, a dangerous secret from my past threatens to come between us, forcing me to confront what kind of man I am.

And whether I’m the one who can save our future.

Or whether fate has other plans for us.

This book follows the Dirty Duet. It’s not necessary to read all the books in the Dirty Universe before reading this, but it is recommended for a better reading experience.

This book may contain subjects that are sensitive to some readers. Please visit my website for content warnings. May include spoilers.

After my fiancée left me at the altar, humiliated and heartbroken, I threw myself into my career. Ironically, the girl who no longer believes in Happily Ever After is now the go-to wedding planner in Las Vegas, but I made it my mission to help the fairytale come to life for the poor unsuspecting brides before reality slaps them in the face.

So here I am, headed to Lake Mistletoe, a quaint little valley town in Idaho to oversee the big occasion for my cousin.

My Aunt convinces me that the beautiful locale is the perfect place to settle in for a little R&R after an exhausting year, so when Willa Arrington, the owner of the Gingerbread Inn offers me a room for the holidays, I gratefully accept.

Brannigan Prince, a talented local artist and my cousin Keller’s new business partner, is exactly the distraction I need. I may not believe in love, but a brief fling with a sexy mountain man? Yes, please.

Can I keep the ice fortress I’ve built around my heart or will Lake Mistletoe work its magic?

*This a stand alone novel in the Lake Mistletoe series.