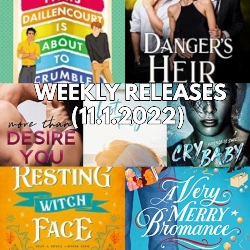 Twelve years ago, Jules Savoie ended her relationship with the vampire overlord of New Orleans, Ruben Dubois. For good reasons. A woman in power must often make sacrifices to protect others. She knows the truth of it down to her aching heart.

When Ruben watches his best friend Devraj get married, a stinging realization hits him hard…he’s done waiting. They say time heals all wounds. In this case, it merely sharpened the pain and made one fact crystal clear. Jules Savoie is his soulmate, and nothing would keep her from him. Not anymore.

Forced to work side by side to fight for the werewolf cause, they campaign together at covens from New Orleans to London. The reignited spark burns hotter than ever before. But when a power-hungry vampire sets his predatory sights on Jules, will their love be strong enough against black magic? Or will he lose her again? And this time, maybe…for good.

Country music’s golden boy Colton Wheeler felt the most perfect harmony when he was with Gretchen Winthrop. But for her, it was a love him and leave him situation. A year later, Colton is struggling to push his music forward in a new direction. If it weren’t about to be the most magical time of year and the support of the Bromance Book Club, he’d be wallowing in self-pity.

It’s hard for immigration attorney Gretchen not to feel a little Scrooge-ish about the excess of Christmas when her clients are scrambling to afford their rent. So when her estranged, wealthy family reaches out with an offer that will allow her to better serve the community, she’s unable to say no. She just needs to convince Colton to be the new face of her family’s whiskey brand. No big deal…

Colton agrees to consider Gretchen’s offer in exchange for three dates before Christmas. With the help of the Bromance Book Club, Colton throws himself into the task of proving to her there’s a spark between them. But Gretchen and Colton will both need to overcome the ghosts of Christmas past to build a future together.

Lost to You by Kelly Elliott

We all know the youngest Bradley sibling must be the most carefree of the bunch. Last this writer heard, Palmer was employed with at least five different jobs. Pet walker, house sitter, vet receptionist, nanny, and the least of my favorite, pooper scooper. To each her own, I guess.

Word on the docks is Palmer has caught the eye of our latest new Seaside resident and single dad, Mason Bryan. Oh, his little boy, Charlie, is just the sweetest thing. A little seagull has planted in my ear that Palmer will be Charlie’s new nanny…don’t worry, Seasiders, I’ve got my ear to the ground and will keep you updated on this latest development.

Paris Daillencourt is about to Crumble by Alexis Hall

Paris Daillencourt is a recipe for disaster. Despite his passion for baking, his cat, and his classics degree, constant self-doubt and second-guessing have left him a curdled, directionless mess. So when his roommate enters him in Bake Expectations, the nation’s favourite baking show, Paris is sure he’ll be the first one sent home.

But not only does he win week one’s challenge—he meets fellow contestant Tariq Hassan. Sure, he’s the competition, but he’s also cute and kind, with more confidence than Paris could ever hope to have. Still, neither his growing romance with Tariq nor his own impressive bakes can keep Paris’s fear of failure from spoiling his happiness. And when the show’s vicious fanbase confirms his worst anxieties, Paris’s confidence is torn apart quicker than tear-and-share bread.

But if Paris can find the strength to face his past, his future, and the chorus of hecklers that live in his brain, he’ll realize it’s the sweet things in life that he really deserves.

More than Desire You by Shayla Black

I’m Xavian Costa—financial master, maverick, and manwhore. Since my dad ran out before I was born and my best friend slept with the woman I intended to marry, I don’t get close to people. But Parker, who poached my ex, is now a bestselling author with a movie deal, and he’s modeled his villain after me to ruin my reputation. I want revenge.

Then his innocent little sister, all grown up, traipses into my office. To save her burgeoning business, she needs a fake fiancé. Since she’s the sexiest brunette I’ve ever seen, I’m happy to help—for a price.

We begin our whirlwind “engagement,” and I get to know Corinne, not as the gawky teenager I remember, but as a beautiful woman.. She’s sweet, sassy, and smart as hell. I admire her kindness. I relate to her ambition. And I love the way she moans when I take her to bed. Soon, I’m falling and questioning my plans to use her to destroy Parker. But when our sham blows up in my face, I’ll have to prove to Corinne that I feel more than desire for her until she says yes for real.

**More Than Desire You is part of the Reed Family Reckoning Contemporary Romance series, but every book can be read as a standalone. A HOT, romantic story with strong language, sexy times, no cliffhangers, and a guaranteed happily ever after!**

My name is Rev.

And I like stealing from rich losers who have no idea the town’s Big Bad Wolf screwed their wives six ways to Sunday.

Such a scandal, indeed.

I have one end goal—to get out of this town.

I’m a loner. And that’s by choice.

People aren’t really my thing. That is…until I meet her. The little firecracker who sets more than my soul on fire.

No one has ever stuck around.

But Darcie is different. She seems to be as broken as me, and when our worlds collide, nothing but trouble looms.

Watch out, baby…down the rabbit hole we go.

She fell in love, got married…and it was all a lie.

They expected a mafia princess, but when Rodrigo meets the woman his father is forcing him to marry, he realizes Giada is much more than she seems. Smart and dangerous, she’s the kind of woman he could love…too bad everything he’s about to tell her is a lie.

Casson knows Rodrigo is in too deep. Rodrigo’s undercover mission as the heir to a powerful Camorra don should have ended long ago, but now he’s engaged to the daughter of another dangerous man, and it’s Casson’s job to pull him out.

She’s nothing either man expected, and everything they want. The last thing they expect is for Giada to invite both of them to her bed.

As the wedding day looms closer, and enemies close in, the line between what’s real and what’s a lie becomes blurred, and Rodrigo and Casson have to decide if love is enough. And if they should tell her the truth.

Unfortunately, there’s someone else waiting in the wings to make sure they never say “I do.”