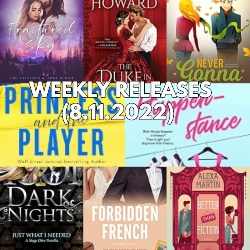 Princess and The Player by Ilsa Madden-Mills

Levelheaded Francesca Lane never thought she’d miss her own wedding. But when her fiancé betrays her, she puts on her wedding dress and ditches the altar for a masquerade ball—at an exclusive lifestyle club.

There, she meets unknown-to-her NFL star Tuck Avery, dressed as a prince and hiding behind a mask—he’s there to celebrate his birthday. For one night, Francesca and Tuck indulge in a wickedly incognito affair. No names. No strings. And the masks don’t come off.

Unfortunately, Francesca realizes quickly that her masked prince is the wealthy jock who lives in the penthouse of her apartment building. His hobbies include parties and supermodels—or so the tabloids say. Getting tangled up with a shallow jerk is the last thing Francesca needs right now, so she vows to keep Tuck from recognizing her (not that she’s his type anyway).

But fate has a teeny-tiny trick up her sleeve…a plus sign on a pregnancy test. Can this tormented prince accept love, or will he push his princess away forever?

Peyton’s mom and my mom were best friends.

You’d think that should cover the gist of it. But, no… Oh, no.

And thus, Peyton Royce had been forced on me since the moment she was born.

We were treated like twins, yet always expected to fall in love one day and get married. The only problem with that was I didn’t love Peyton. And I’m positive she didn’t even like me in return.

Don’t get me wrong. I adored our moms—swear to God—but they had to let this stupid notion go because one thing had become abundantly clear to me over the years. I would never marry Peyton Royce. I think it was my one goal in life, actually.

So… Sorry, Mom and Aunt Donna, but you two just weren’t going to get your way on this.

Peyton and I? It was never gonna happen.

Damaged. Broken. Destroyed. I’ve heard it all. A single moment of trusting the wrong person shattered my life into pieces, and my family has never looked at me the same. It’s impossible to convince them that I’m anything more than the broken girl they rescued all those years ago.

Until I meet him.

Ramsey’s grumpy demeanor and menacing scowl scare most of the world away. But not me. Not when I’ve seen his gentle hands soothe an abused colt or comfort a terrified mare.

And when I finally get up the courage to strike out on my own, Ramsey’s there. Roommates felt like such a safe proposition until Ramsey’s lingering touches and wicked smile light a fire in me I don’t think will ever be extinguished. And he feels it, too…

But just as my new life begins to take root, an evil from my past emerges from the shadows, casting a darkness on my newfound freedom. And this time, they won’t settle for pieces of me. They want everything…

Just What I Needed by Kylie Scott

When the Stage Dive crew decides to help, they do it in a big way.

Nanny and housekeeper Jude has been going through a dry patch. Getting ready to dip her toes back into the dating pool is a little nerve racking. And the offers of assistance from her boss, David Ferris, and his band are not helping. Right up until music producer Dean Jennings arrives to work on the band’s latest album.

But Dean is more than a little wary of dating anyone with anything to do with the Stage Dive crew after losing Lena to lead singer Jimmy Ferris all those years ago. Can Jude a) Convince the crew to stay out of her business and b) Woo the man of her dreams?

**Every 1001 Dark Nights novella is a standalone story. For new readers, it’s an introduction to an author’s world. And for fans, it’s a bonus book in the author’s series. We hope you’ll enjoy each one as much as we do.**

Better than Fiction by Alexa Martin

As a self-proclaimed book hater and a firm believer that the movie is always better, Drew Young didn’t anticipate inheriting her grandma’s bookstore, the Book Nook. She’s in way over her head even before the shop’s resident book club, comprising seven of the naughtiest old ladies ever, begin to do what they do best—meddle.

Bestselling author Jasper Williams is a hopeless romantic. When he meets Drew at his Book Nook signing event, he becomes determined to show her the beauty of reading. He curates a book bucket list in exchange for her help exploring the local Denver scene for his current manuscript. From going river rafting to trying local restaurants, Drew begins to connect with Jasper in a way she only thought happened in fiction.

When messy family ties jeopardize the future of the Book Nook, Drew is caught between a bookshelf and a hard place. She’s reminded that real life isn’t always big dreams and sweeping romance. But Jasper is the plot twist she never saw coming and he’s writing a happily ever after just for them.

The Duke in Question by Amalie Howard

Lady Bronwyn Chase is far from the paragon of society that her mother expects her to be. Which is why she’s on her brother’s passenger liner bound for America with a secret packet of letters that could get her into trouble. Serious trouble—the kind that a duke’s sister shouldn’t be in; the kind that puts spymaster Valentine Medford, the Duke of Thornbury, on her trail. But as the duke gets closer to Bronwyn and the secrets she’s keeping, he’ll have to decide between the mysterious woman who calls to him, or his allegiance to the Crown.

Elise Brandeis has never won a Pulitzer—and she never will. At least not while she’s delivering sandwiches at the Gotham Times, instead of working there as an actual reporter. Her only shot at seeing her byline in print is to prove to the no nonsense managing editor that she has a nose for news. And she’s got just the story to grab her elusive attention.

Right after she delivers this turkey on ciabatta.

Chasing down leads brings Elise to Roosevelt Island, but just when the trail of clues begins to take shape, she gets stuck. Literally. On a cable car with three strangers who couldn’t be more different. An uptight rugby coach, a construction worker and a former adult film star she pretends not to recognize a little too well.

At first, Elise wants nothing more than to be rescued ASAP.

An hour later, everything has changed. By pure happenstance, four separate journeys have collided in an intense, meaningful way. Suddenly, disentangling their lives feels more impossible than winning that Pulitzer. Good thing Elise is too busy proving herself at work to consider three boyfriends. Nobody has time for that—even if they make giving in feel oh so right. But three heads are better than one and these loners will teach themselves to work together to win Elise over forever…

And more importantly, keep their dirty socks off her floor.

Once upon a time, Emmett Mercier was the golden boy of St. John’s Boarding School. The crown prince of his father’s vast business empire, unapologetically attractive…oh, and fluent inFrench.

At school, I kept a picture of him hidden beneath my pillow, a tiny token of my adolescent infatuation, but I might as well have been worshiping a distant demigod. He was hardly aware of my existence. I was far too young, and he was far too consequential—until one day we found ourselves alone together in the dark library and struck up a friendship…of sorts.

But in the years since leaving St. John’s, I’ve no longer bothered yearning for Emmett. What a useless dream. I would have gone crazy trying to keep up with his jet-setting life. Which Parisian hotel is he calling home now? Is there some new lithe model draping herself across his lap today?

My negligence comes back to bite me. I’m ill-prepared the day he strides into my art gallery. There’s only a mere trace of the boy I once knew. Self-assured, handsome, intoxicating—Emmett is more man than I can handle.

There’s no room for him in my gilded cage. My life is planned to a T. From where I go to how I dress, it all depends on the calculated whims of my grandmother. Soon, I’ll even dutifully walk down the aisle toward a man of her choosing.

And therein lies the problem: I was doing just fine without him, but now that he’s rattling the bars of my cage, I’m forced to acknowledge the truth.

Once upon a time, Emmett Mercier was all I wanted. The midnight wanderings, the whispered nothings, the unbearable longing—they etched indelible marks on my soul. Even now, after all these years, my heart is only fluent in one language.
Forbidden French.