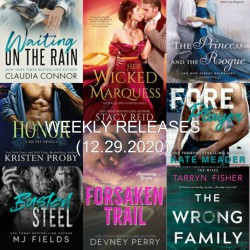 Aria Saint-James has planned the perfect getaway: sweatpants, takeout and two weeks alone with her sister and nephew. Nowhere on that list is wearing a low-cut dress and uncomfortable heels to attend a wedding where she knows neither the bride nor the groom. Toss in her nemesis, Brody Carmichael, and her road trip to Arizona is officially a bust.

But at least there is champagne.

She blames the bubbly for falling into bed with Brody that night. Enemy or no, the billionaire is irresistible in a tux. But after their one-night tryst, Aria has no choice but to cut her vacation short, returning home to escape his devilish smile, vowing never to see Brody again.

Except Aria gets a surprise a few weeks later—she’s pregnant. When he learns that she’s carrying his child, Brody offers Aria the chance of a lifetime. The catch? She has to live under his roof until the baby is born.

Either they’ll kill each other in nine months. Or discover love buried beneath their hate.

A Righteous Man by Jay Crownover

You know his name.
You’ve seen his face.
You’ve spent money on the endless amount of useless crap he endorses.
Of course, you’ve heard the stories.
You know the ones…
The one that claimed he was hard to work with and totally unprofessional on set.
The one where he got caught doing drugs on the set of the most popular, family-friendly show in America.
The one where he ruined the reputation—and career—of America’s sweetheart.
There’s more truth to those stories than his fans want to believe because Salinger is the kind of thoughtless, careless, dangerous Hollywood bad boy the paparazzi and fame-hungry starlets can’t get enough of.
Eventually, the shine of his flashy lifestyle started to fade, and Salinger realized the only thing he’s famous for nowadays is his bad behavior and well-documented struggle with addiction.
The former golden boy is beyond tarnished, and the only person who can help him get his glow back is the one woman who wants absolutely nothing to do with him.

You might recall her name.
It’s possible you vaguely remember her face.
You’re probably wondering where she went. After all, you’ve heard the stories…
The one where she exposed Salinger Dolan’s drug use all those years ago.
The one that said she tried to ruin his career because she was envious of his popularity.
The one about how she went from being everyone’s favorite to a pariah overnight.
Maren Copeland is now known as the comeback queen. After years of hard work and purposely avoiding entanglements with problematic heartthrobs like her first co-star, she’s on track to revitalize her career and rearrange her priorities after a very messy and very public divorce.
For the first time in both her professional and personal life, she’s the one calling all the shots.
Unfortunately, the path to get her where she wants to be leads directly to none other than Salinger Dolan.
He’s the one and the only person she swore she would never work with again.
Once upon a time, he cost her everything. He’s back to make amends and promised to give her anything she wants if she’ll just give him a chance to prove he’s grown up.
She doesn’t trust him.
She knows she’d be a fool to believe he’s changed.
After all, what are the odds that a spoiled, entitled brat like Salinger Dolan could become a righteous man?

The Wrong Family by Tarryn Fisher

Juno was wrong about Winnie Crouch.

Before moving in with the Crouch family, Juno thought Winnie and her husband, Nigel, had the perfect marriage, the perfect son—the perfect life. Only now that she’s living in their beautiful house, she sees the cracks in the crumbling facade are too deep to ignore.

Still, she isn’t one to judge. After her grim diagnosis, the retired therapist simply wants a place to live out the rest of her days in peace. But that peace is shattered the day Juno overhears a chilling conversation between Winnie and Nigel…

She shouldn’t get involved.

But this could be her chance to make a few things right.

Because if you thought Juno didn’t have a secret of her own, then you were wrong about her, too.

From the wickedly dark mind of bestselling author Tarryn Fisher, The Wrong Family is a taut new thriller that’s riddled with twists in all the right places.

Her Wicked Marquess by Stacy Reid

Miss Maryann Fitzwilliam is too witty and bookish for her own good. No gentleman of the ton will marry her, so her parents arrange for her to wed a man old enough to be her father. But Maryann is ready to use those wits to turn herself into a sinful wallflower.

When the scandal sheet reports a sighting of Nicolas St. Ives, the Marquess of Rothbury, climbing out the chamber windows of a house party, Maryann does the unthinkable. She anonymously claims that the bedchamber belonged to none other than Miss Fitzwilliam, tarnishing her own reputation—and chances of the dastardly union her family secured for her. Now she just needs to convince the marquess to keep his silence.

Turns out Nicolas allows for the scandal to perpetuate for his own reasons… But when Maryann’s parents hold fast to their arranged marriage plan, it’ll take a scandal of epic proportions for these two to get out of this together.

After a very public breakup and a viral post that declares him the villain, power forward Cal Foreman is taking a timeout from women and relationships to focus on hockey. When Chicago Rebels captain and old friend, Vadim Petrov, “volunteers” him to help train Vadim’s sister Mia, Cal figures he can do a favor for a pal and get ready for the season with his new team. But the imperious Russian would slice a skate blade through Cal’s internal organs if he knew what lessons Mia really wants.

Yeah, not that kind of stickhandling.

Hockey phenom and Olympics hopeful Mia Wallace needs help seducing the man of her dreams. That man is most definitely not Cal Foreman: notorious playboy, thorn in her side, and her brother’s bestie. But surely a guy with his reputed skill set has a few tips on how she can nail her target—which makes him the perfect foreplayer.

Cal knows Mia sees him as merely the warm-up act in her grand plan to win another man, but as they spend more time together, he wonders if that’s enough.

If they could be more.

And if he could convince her he’s worthy of the starting line-up . . . in her heart?

The Princess and the Rogue by Kate Bateman

In The Princess and the Rogue, Bow Street agent Sebastien Wolff, Earl of Mowbray, doesn’t believe in love—until a passionate kiss with a beautiful stranger in a brothel forces him to reconsider. When the mysterious woman is linked to an intrigue involving a missing Russian princess, however, Seb realizes her air of innocence was too good to be true.

Princess Anastasia Denisova has been hiding in London as plain ‘Anna Brown’. With a dangerous traitor hot on her trail, her best option is to accept Wolff’s offer of protection—and accommodation—at his gambling hell. But living in such close quarters, and aiding Wolff in his Bow Street cases, fans the flames of their mutual attraction. If Anya’s true identity is revealed, does their romance stand a chance? Could a princess ever marry a rogue?

Waiting on the Rain by Claudia Connor (Live 12.31)

Being blind doesn’t hold Ava Bennet back in the least. With her work, her shopping, and public transportation within walking distance, she’s totally at home in the big city. But she’s not in the city now. Temporarily back in her small home town to help her father has her struggling in a big way.

Luke Walker is done running from his troubled past. Finally home after years in the military, he’s ready to make amends with his family and set down some roots. But adapting to civilian life is way harder than he ever could’ve expected.

She has no intention of sticking around. He has no plans to run again. All they have is one month together. Will it be enough for Luke to prove he’s everything Ava needs—in light, in darkness, and most importantly, even in the rain?

She’s the forbidden fruit, and I’m her dirty fantasy.


Four years ago, she kissed me. She said she was nineteen. She wasn’t even close. To make it even worse, she’s daddy’s little princess.


Then, a year ago, I was hired to head a security team for her out-of-control younger sister while on a European tour with the band Foreplay. I vowed to stay away from her, becoming a shadow in the dark whenever she was around.
Now she’s been hired to photograph her sister’s sixty-day honeymoon, all around the world.
She’s not a little girl anymore. She makes damn sure I notice that, too. But I’m still the same man.


Falling is not an option. However, each day, she’s making it harder and harder to avoid.
I promised myself not to break her heart, yet mine lies in busted pieces all over the world .

Nick loves his post as the princess’s security detail. Unfortunately, the bullet that ripped through his shoulder put a stop to pretty much everything in his life for a while, and his bosses have plans for him that don’t include sitting at headquarters with the other guards, drinking beer in his off-hours. They’ve assigned him a medical professional and banished him to the lake house for rehab. Which wouldn’t be so bad, but his new babysitter isn’t at all what he expected. She’s sin and temptation wrapped in the perfect package and infuriates him like no other.

Coming back home to Montana sounded like a dream to Jordan, and her new job is something she could do in her sleep. But then she meets her charge. Nick is stubborn, frustrating, and way too sexy. As a professional, she knows she should keep her distance, but he’s much too irresistible. And maybe it’s the magic of the holiday season, but he grows on her way faster than she ever thought possible.

When forced to imagine what life might be like without the other, Nick and Jordan quickly realize all they need is each other. Because it’s undeniable that they have it all—friendship, trust, loyalty, love. And yes, honor. The rest will fall into place.