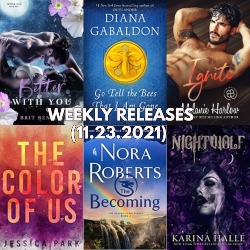 My new neighbor is a firefighter–and a scorching hot single dad–but I swear I didn’t set off that smoke alarm on purpose.

(And I was beyond mortified when he rushed in and saw me naked.)

Nothing happened, of course–because I, Winnie MacAllister, romance junkie and owner of a constantly broken heart, have sworn off men for one solid year.

Even protective men with chiseled jaws, bulging biceps, and deep brown eyes that make my breath come faster. Even former SEALs with broad chests and strong hands that make my skin sizzle. Even gorgeous, grumpy guys who have their hands full raising two adorable little girls and claim they don’t believe in love.

Until Dex kisses me one night, and I drop all my defenses.

Dex and I might be twelve years apart, but the fire between us is the kind that will never burn out.

How can I convince him to give happily-ever-after with me a chance?

The Becoming by Nora Roberts

They waited, knowing the god threatened all worlds. He would again seek the blood of his blood, and the wheel would turn so the time would come when the Talamhish could no longer stop him. She, the bridge between worlds, must return and awaken, must become and must choose to give all, risk all to help destroy the god.

When Breen Kelly makes a leap into the unknown with a summer trip to Ireland in search of her father, little does she know she will find a portal into another world – Talamh – where she will find magic, family and a destiny beyond her wildest dreams

Breen is welcomed by most of her family and friends but there is one who is far from welcoming. Her grandfather, the outcast god Odran plots to destroy Talamh and now all must unite to defeat his dark forces. There will be losses and sorrows, betrayal and bloodshed. But through it, Breen Siobhan Kelly will take the next step on the journey to becoming all that she was born to be.

A tale of adventure, magic and finding your home, from global bestseller Nora Roberts

Go Tell The Bees that I Am Gone by Diana Gabaldon

Jamie Fraser and Claire Randall were torn apart by the Jacobite Rising of 1745, and it took them twenty years to find each other again. Now the American Revolution threatens to do the same.

It is 1779 and Claire and Jamie are at last reunited with their daughter, Brianna, her husband, Roger, and their children on Fraser’s Ridge. Having the family together is a dream the Frasers had thought impossible.

Yet even in the North Carolina backcountry, the effects of war are being felt. Tensions in the Colonies are great and local feelings run hot enough to boil Hell’s tea-kettle. Jamie knows loyalties among his own tenants are split and the war is on his doorstep. It’s only a matter of time before the shooting starts.

Not so far away, young William Ransom is still coming to terms with the discovery of his true father’s identity – and thus his own. Lord John Grey also has reconciliations to make and dangers to meet . . . on his son’s behalf, and his own.

Meanwhile, the Southern Colonies blaze, and the Revolution creeps ever closer to Fraser’s Ridge. And Claire, the physician, wonders how much of the blood to be spilt will belong to those she loves.

The Color of Us by Jessica Park

Callie Evans isn’t exactly living her best life in Los Angeles. She dropped out of college, has been repeatedly fired, and is now literally watching paint dry at a hardware store for a living. This depressing existence isn’t what she had planned for her early twenties, but here she is.

Although she’s faced a shattering trauma, she’s learning that avoiding grief has owned her for far too long. A change of scenery might be what she needs to regroup and move forward.

Callie takes a few months away from her California chaos to handle renovations on her family’s old house in small-town Vermont. This temporary escape could be just the thing to ease the pain that crushed her past and continues to impact her present. And maybe, just maybe, she’ll get a chance to reconnect with a certain boy from her childhood, whom she’s now aching to see again.

When Callie rolls back into her hometown, she finds that her preteen crush, Danny, has turned into a wildly hot twenty-something. The things that haven’t changed are his humor and kindness. But Danny’s hidden demons might possibly be even more painful than her own.

As Callie spends the summer falling in love with cooking, home repairs, and hosting brunches for her quirky neighbors, she also fights falling in actual love with Danny. After all, she knows from experience that love is never guaranteed to last.

Only the summer will tell.

My name is Amethyst DeMille and I’m in love with a vampire.
Sounds complicated, doesn’t it?
Yet the fact that he’s a sexy, centuries-old blood-drinking vampire isn’t what makes our relationship complicated.
It’s because we live in the same house together, work at the same exclusive club together, and he happens to be my best friend with absolutely no idea how I feel about him.
I mean, sure he’s probably seen me give him heart eyes more than once. Can you blame me? Wolf is not only a deadly, charismatic vampire with great persuasion skills, he also happens to be built like a Nordic God, all solid muscle and chiseled bone structure and haunting eyes that I sometimes think tell me more than he wants me to know. He’s the type of guy most women find themselves falling for (and not just because they might end up his next meal).
But despite the simmering sexual tension and yearning between us, I know there’s no way I’ll ever be able to tell him how I feel. After all, I’m a human and he’s a vampire and he’s told me more than once that those love stories never end well.
Too bad my heart doesn’t know the difference.

***
Nightwolf is a contemporary vampire romance with a friends-to-lovers twist set in modern day San Francisco. This book is a spinoff of The Dark Eyes Duet but can be read as a total standalone (however, if you are reading it as a series, The Dark Eyes Duet (Black Sunshine and The Blood is Love) should be read first).

Better with You by Brit Benson

Riggs Stanton is a thief.

He’s also a liar, a jerk, and a playboy jock.
Sure, I might have thought we had a connection.
I might have thought he was worth breaking my “no dating” rule.
He might have even given me the best orgasm I’ve ever experienced to date.
But it was a farce.
A trick.
Another lie.
And I don’t make mistakes twice.

Now he says he needs me.
One week of my help and I never have to deal with him again.
For ten grand, I can suffer anything for seven days.
Even Riggs Stanton.